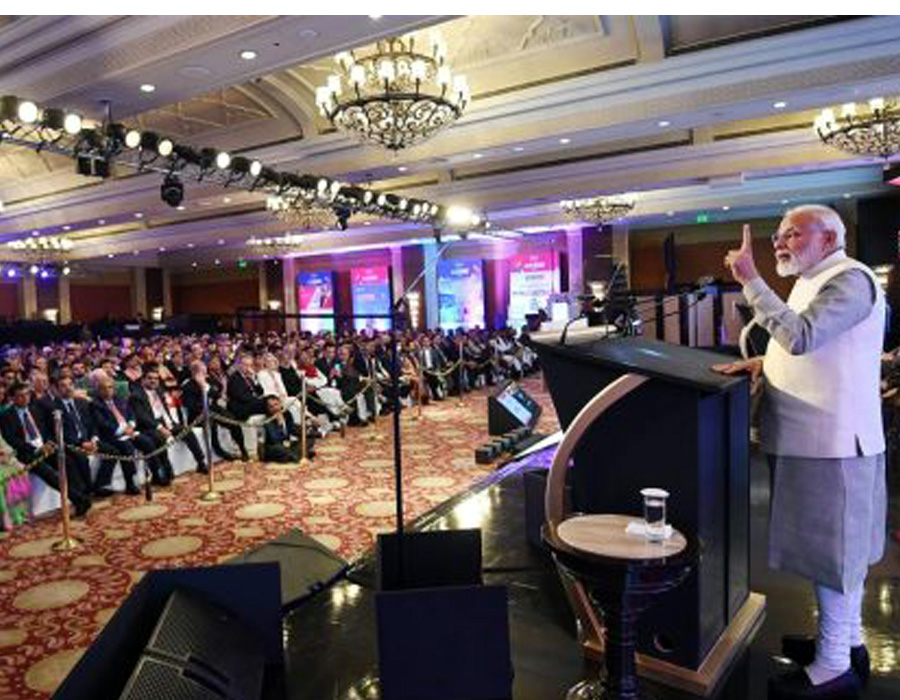 Playing down the recent slowdown in India’s GDP growth, Prime Minister Narendra Modi on Friday presented a rosy picture of the economy saying its fundamentals are strong, policies are clear and FDI figures are in the upswing.

“Fundamentals of the Indian economy are strong and our policies are clear. India got $48 bn FDI in 2019, over 16 per cent growth, 53 per cent more private equity, venture capital investment at $19 billion,” Modi said while speaking at the Global Business Summit.

“Even then how this global slowdown impacts Indian economy to the least, how much initiatives and proactive actions could be taken, we are taking and have been benefited. India is now the 5th largest economy. Till 2014 we were at 11th spot”, he said taking a jibe at the UPA government.

He said FPIs are also investing more in the country. Last year this investment was $19 bn. “It’s clear the investors looking for new destinations are coming to India”, Modi said to a packed audience of CEOs and bureaucrats.

India’s GDP growth slipped to 4.7 per cent in the December quarter. India’s economic growth for the current fiscal has been pegged at 5 per cent – the lowest in 11 years – and a recovery is expected only in FY21 when the economy is expected to grow at 6-6.5 per cent.

Analysts said the country’s growth trajectory going forward will depend on a lot of factors including the impact of coronavirus on trade and other factors like inflation and demand.

The Prime Minister stressed on the government’s strong resolve to remove cronyism from businesses.

“We have seen any time the private sector is given the freedom, it moves ahead fast. That’s why our government is opening maximum sectors for the private sector. The government stands with honest wealth creators. We are simplifying laws for this continuously, removing old laws. To encourage fair competition, we are dealing strongly with cronyism and corruption strongly. Banking or FDI policy, allotment of natural resources, we are removing chronism from all sectors. We have stressed on simplification, rationalisation, and transparency. We have brought ‘Vivaad se Vishwas’ scheme in the Budget to settle tax disputes. We are progressing fast on labour reforms. Government has made many changes in the Companies Act to decriminalise several sections”, he told the captive audiences.

The Prime Minister, who has set a target 5 trillion dollar size for the economy by 2024-25, said to make India achieve that, the government is working at four different levels — collaboration with the private sector, fair competition, wealth creation, deletion of archaic laws. “We have made a roadmap of 100 lakh crore for infrastructure. We have strengthened PPP models taking public-private-partnerships to powerful-progressive-push.”

Modi said the government is constantly with all stakeholders, taking big decisions after taking industry feedback. He said the country is moving forward to creation through collaboration, freeing the country from the Status Quo.

The Prime Minister said, “We are pulling out sector after sector from convenience of inaction. We have conviction to do the right things, conviction to break the status quo.”

Showing the growth trails, Modi said six years ago our airports used to handle 17 crore passengers, now they do 34 crore passengers. The cargo handling was 550 million tonne, today it is 700 MT. The turnaround time in major ports has been reduced to 60 hours from 100 hours.