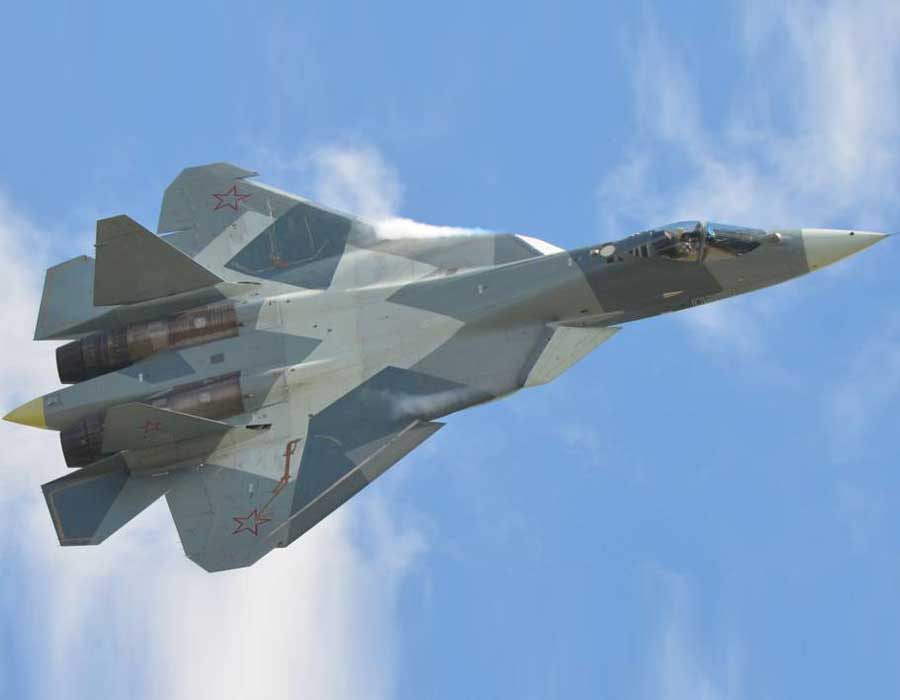 Rusia has finally started the mass production of Su-57, the much-awaited fifth-generation stealth fighter jet. Russian Defense Ministry has reportedly signed a contract with Sukhoi Aircraft Company, the manufacturer of Su-57, for the purchase of over 76 aircraft. In a guarded statement, Indian Air Force Chief BS Dhanoa has said that India can take a decision on buying the fifth-generation stealth aircraft only after the Russian Air Force starts flying it.  India and Russia had partnered during the initial development of the Su-57. However, India had pulled out of the project after Moscow showed reluctance in sharing the source codes which was essential for upgrading the aircraft in future without Russia’s help. India had also expressed reservations over the in-flight performance of the aircraft, especially its engine.

Here’s all you need to know about the Su-57 aircraft and its India connection:

1. Su-57 is a single-seat twin-engine stealth fighter aircraft which has super manoeuvrability and supersonic flight capabilities. Its stealth and weapon-carrying capabilities are believed to rival the American F-22 Raptor and F-35 Lightning II fighter jets. On July 29, 2019, Sukhoi Aircraft Company, a part of Russia’s United Aircraft Corporation, announced that the Su-57 has entered mass production stage. The first Su-57 fighter jet will join the Russian Air Force combat unit before the end of 2019. Su-57 has already been tested under combat conditions in Syria.

2. Initially, India’s Hindustan Aeronautics Limited was partnering with Russia’s Sukhoi Aircraft Company for this project. In the early phase of its development, this aircraft was known as Sukhoi/HAL Fifth Generation Fighter Aircraft(FGFA), Prospective Airborne Complex of Frontline Aviation (PAK FA) or Perspective Multi-role Fighter (PMF). The project was kicked off in 2001 and a T-50 prototype made its maiden flight in 2010. Su-57’s first test flight with a new-generation engine was completed in December 2017.

3. However, India moved out of the joint project in 2018 owing to differences on a wide range of issues including Russia’s refusal to share the source codes without which India could not have upgraded the aircraft in the future without Russian support. The IAF was also unhappy with the aircraft’s in-flight performance, the capabilities of its engine and the aircraft’s inability to meet low-observability requirements. In fact, the IAF had sought at least 40 changes but the two sides failed to reach an agreement.

4. Russia has now offered India an export variant of the Su-57, designated Su-57E. Giving an indication that India is weighing its options for purchasing the Su-57 fighter jet in the future, IAF Chief BS Dhanoa has said that India can take a decision on buying the fifth-generation stealth aircraft only after the Russian Air Force starts flying it.

5. “If you mean the 5th Generation aircraft (Sukhoi Su-57), the question has not yet been considered. When the aircraft is already put into service with you, only then can we make a decision for ourselves. We are ready to consider it for acquisition after we see it, and it is provided to us for consideration and assessment,” BS Dhanoa told Russian newspaper Krasnaya Zvezda.