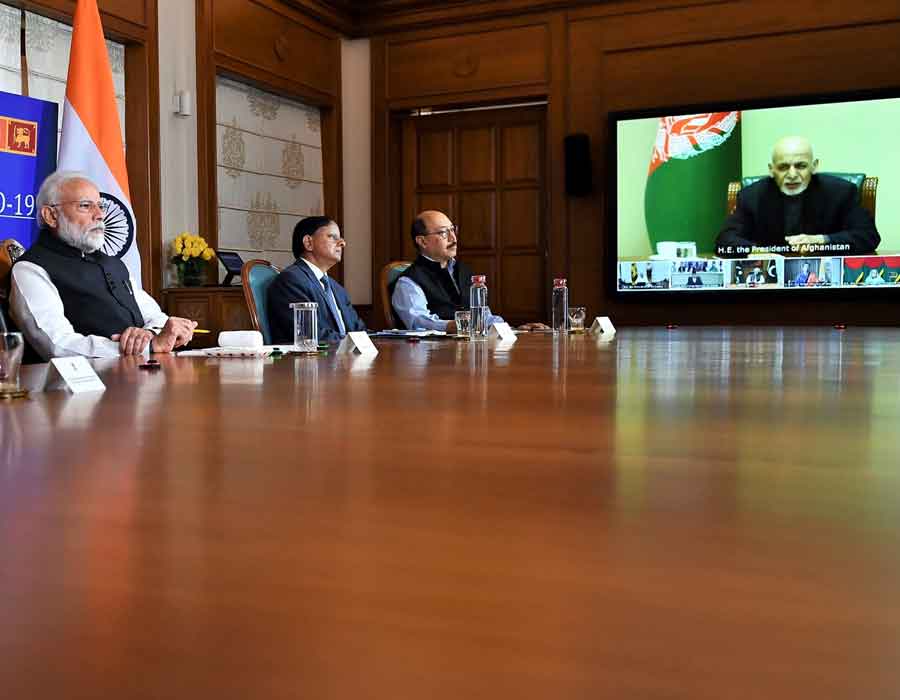 After advocating close cooperation between SAARC nations for combating coronavirus outbreak in the region, Prime Minister Narendra Modi on Sunday played the lead role during the videoconferencing of the leaders from the member states and suggested vigilance for effective handling of the pandemic.

PM Modi also offered $10 million to set up a common voluntary emergency fund for the members of the South Asian Association of Regional Cooperation (SAARC) to combat the coronavirus outbreak.

In an unprecedented move in the diplomatic history of the world, eight countries of SAARC held a web-summit to chalk out a joint strategy to contain the coronavirus outbreak that has hit the world.

The initiative was taken by Prime Minister Narendra Modi in view of the WHO advisory to avoid public gatherings. The proposal was welcomed and accepted by other members of the SAARC – Afghanistan, Bangladesh, Bhutan, the Maldives, Nepal, Sri Lanka and Pakistan.

Prime Minister Modi led the video-conference on Sunday evening by briefing the members on the measures India took to prevent and contain the pandemic since the outbreak of COVID-19, which originated from Wuhan city in China.

“As we all know, COVID-19 has recently been classified by WHO as a pandemic. So far, our region has listed fewer than 150 cases. But we need to remain vigilant,” he said.

“The step-by-step approach has helped avoid panic,” Modi said. He said that India has made special efforts to reach out to vulnerable groups and has worked to quickly ramp up capacity in its system including through training of medical staff.

“We also responded to the call of our people abroad. We evacuated nearly 1,400 Indians from different countries. We also similarly helped some of the citizens of our neighbouring countries.”

“We must all work together and must succeed together. We are still in an unknown situation,” Modi said.

Nepal Prime Minister Oli joined the summit even as he had undergone a surgery recently.

Prime Minister Modi also offered rapid response medical teams, along with testing kits and other equipment for the SAARC members. “They will be on standby, at your disposal if required,” Modi said, adding that India could also provide online training capsules for medical emergency teams to raise the capacity of emergency staff.

Additionally, the Prime Minister suggested that the SAARC members could create an integrated digital database of virus carriers and the people contacted besides using the pre-existing facilities like the SAARC disaster management. Modi also offered to set up a common research platform for the control of epidemics within South Asia for the future. Indian Council of Medical Research (ICMR) can coordinate such an exercise, he said.

Modi also suggested that all the members should jointly review the economic consequences of COVID-19 and insulate local trade and value chains from its impact.

The conference was organised following Prime Minister Modi’s proposal on Friday seeking formulation of a joint strategy by SAARC member nations to control and monitor the Covid-19 outbreak which originated in China’s Wuhan city in December last year and has killed over 5,000 people and infected more than 1.50 lakh people globally.

The video-summit is significant because, since 2016, SAARC has been mostly inactive. Prime Minister Modi had refused to attend the 2016 SAARC summit which was to be held in Islamabad, following the Uri terror attack perpetrated by Pakistani terrorists. After Bangladesh, Afghanistan and Bhutan also withdrew from the meet, the summit was called off.

SAARC summits are held biennially and hosted by member states in alphabetical order. The last summit was held in 2014 in Kathmandu, Nepal.