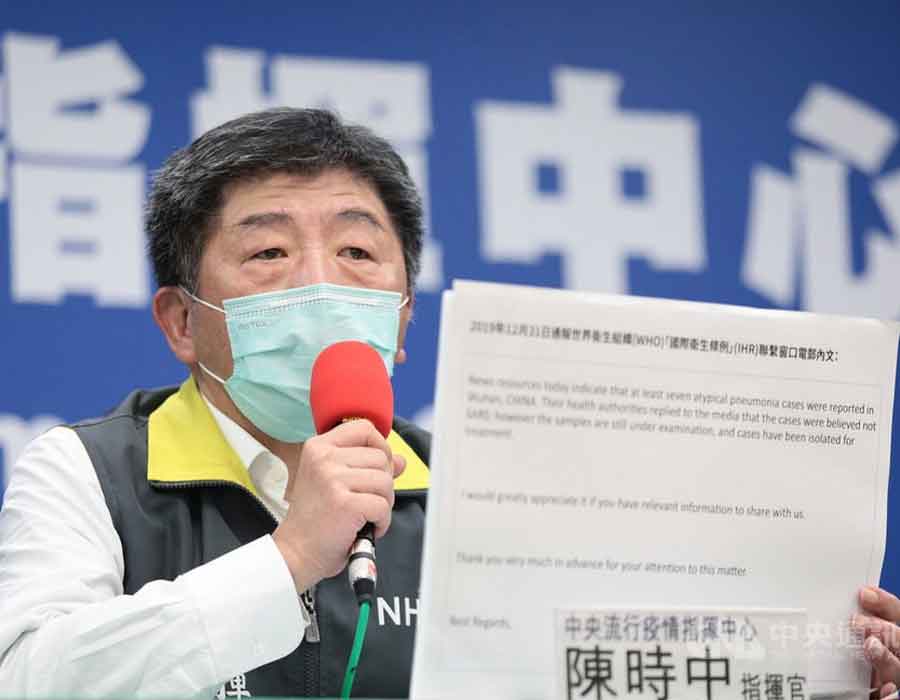 After disclosing that it had warned the World Health Organisation (WHO) about the “possible” contagious nature of the novel coronavirus in Wuhan on 31 December 2019, Taiwan on Saturday produced email written in this regard to substantiate its claim.

The WHO had earlier rejected Taiwanese claim and dared it to show the email that was sent in this regard.

Taiwan’s Health Minister Chen Shih-chung on Saturday showed to media persons a placard printout of the contents of Taiwan’s email to the WHO in this regard.

“News resources today indicate that at least seven atypical pneumonia cases were reported in Wuhan, CHINA. Their health authorities replied to the media that the cases were believed not SARS; however the samples are still under examination, and cases have been isolated for treatment. I would greatly appreciate it if you have relevant information to share with us. Thank you very much in advance for your attention to this matter,” read the email.

The minister argued that though Taiwan’s Centers for Disease Control did not actually mention “human-to-human” transmissions in the email, it had “strongly hinted” at the possibility.

“If being isolated for treatment is not a warning, what situation will constitute a warning?” Chen asked.

Alleging a deliberate cover-up by China, Chen asked Beijing to clarify whether it informed the world health body of the seven cases of Wuhan.

“What else would be called a cover-up?” he asked.

Chen asserted that if China informed the world health body of the seven cases, it was a clear case of dereliction of duty on part of WHO.

Interestingly, Taiwan has not been given the membership of WHO on account of China’s opposition. China considers Taiwan as part of its territory under its “One China Principle”.

Meanwhile, former United States Ambassador to the United Nations Nikki Haley has also taken note of Taiwan’s claims of alerting WHO on Dec 31 and demanded an investigation into China-WHO relationship.

Accusing China of influencing the functioning of international organizations like WHO, Haley said that the US had a right to seek answers as it contributed 22% of the entire budget of the world health body.

“This is what China does. They try and leverage and get influence. And what we’re seeing is the World Health Organization, once again, has fallen for it. And I can’t believe they’re going to go so far as lecture the president. I mean, if anything, we deserve to hold them accountable. We have the rights to answers. They need to be investigated,” she added.