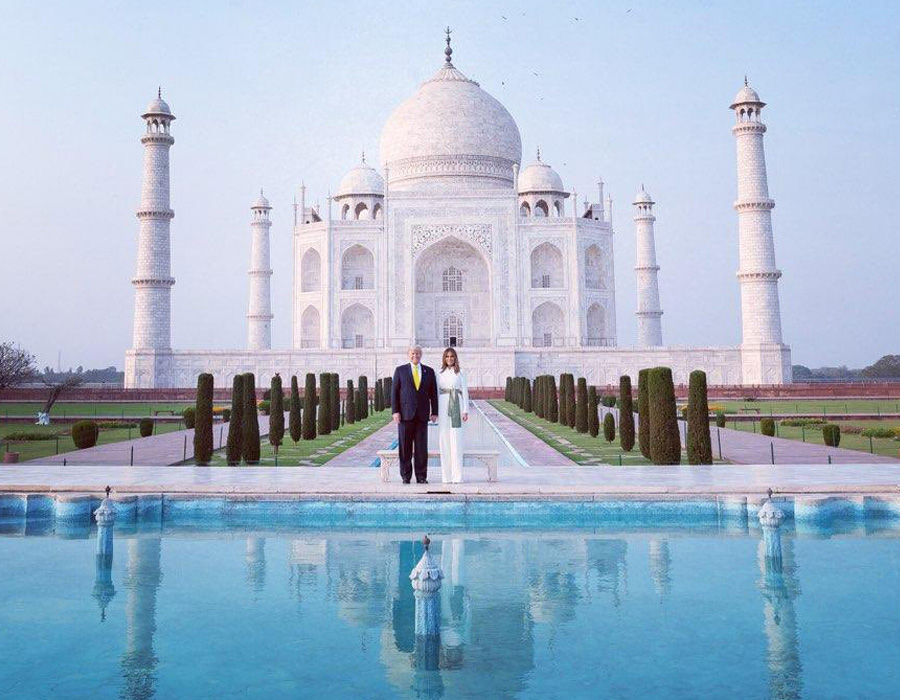 Trump with Melania at TajMahal

Terming India an incredible country, US President Donald Trump on Wednesday said that a lot of progress was made in bilateral ties during his maiden official visit to the country. Lavishing praise on Prime Minister Narendra Modi, President Trump called him a great gentleman and a great leader.

“He (Prime Minister Narendra Modi) is a great gentleman, a great leader. It’s an incredible country,” Trump told reporters after his return from India.

President Trump visited India from February 24 to 25. He was accompanied by First Lady Melania Trump daughter Ivanka Trump, son-in-law Jared Kushner and the top brass of his administration, including National Security Advisor Robert O’Brien. They visited Ahmedabad, Agra and New Delhi before leaving for Washington on Tuesday.

During his stay, he addressed a massive rally in Ahmedabad, visited Agra and held official meetings in New Delhi. The US president was feted at the world’s largest cricket stadium in the “Namaste Trump” event in Ahmedabad and was cheered by tens of thousands of people.

“We were treated very, very well and we really enjoyed it. A lot of tremendous progress was made in terms of relationship–our relationship with India is extraordinary right now,” he said. “We are going to be doing a lot of business with India, they are sending billions and billions of dollars now to the United States,” Trump said in response to a question.

In a tweet, his daughter Ivanka said that, Trump announced that US International Development Finance Corporation “will establish a permanent presence in India to strengthen our economic ties, improve development plus further women’s economic empowerment through WGDP (Women’s Global Development and Prosperity Initiative)!” On her arrival from India, she thanked Modi for “your warm hospitality as we visited your beautiful country and celebrated the strength, spirit and unity of the US and India!”

“Throughout our visit we saw monumental achievements of human creativity & proof of the infinite capacity of the human heart!” she said. The First Lady tweeted two pictures of her with Trump facing the Taj Mahal in Agra.

“One of the Seven Wonders of the World, the breathtaking Taj Mahal!” she said. President Trump “reaffirmed the strong strategic partnership, vibrant economic ties and expanding security relationship between our two countries. Wonderful trip, but glad to be home! Thank you India!” said White House Press Secretary Stephanie Grisham.

During the visit, India and the US on Tuesday finalized defense deals worth USD 3 billion under which 30 military helicopters will be procured from two American defense majors for Indian armed forces. The deals will include procurement of 24 MH-60 Romeo helicopters by India from the US at a cost of USD 2.6 billion. Another contract to acquire six AH-64E Apache helicopters for USD 800 million from the US is also on the table.