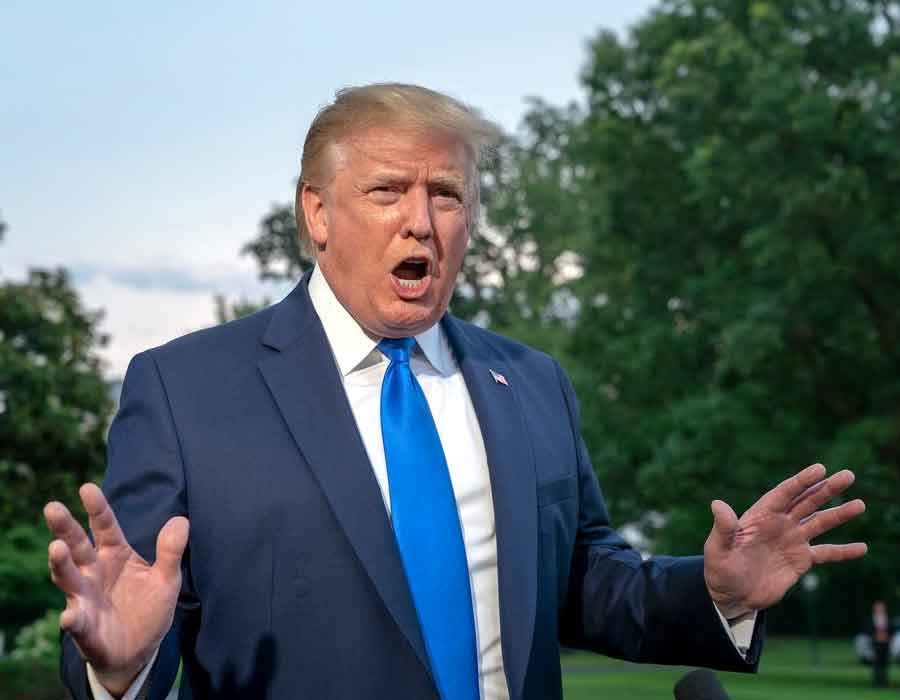 The United States Senate Wednesday acquitted President Donald Trump on two articles of impeachment — abuse of power and obstruction to Congress — giving him a major political and moral victory in an election year.

The Republican-majority Senate voted 52-48 to acquit him of abuse of power and 53-47 to acquit him of obstruction of Congress, thus preventing the Democratic move to overthrow him, for which they required two-thirds of votes in the 100-member House.

The ruling Republican party has 53 seats while the Democrats have 47.

Read Also | US President Donald Trump not to visit Pakistan during his India trip next month: Islamabad

Republican Senator Mitt Romney, a bitter critic of Trump and who was the party”s presidential nominee in 2012, voted against the president on the first charge, but followed the party line on the second article of impeachment. Rest of the members voted on party lines.

“The President is pleased to put this latest chapter of shameful behavior by the Democrats in the past, and looks forward to continuing his work on behalf of the American people in 2020 and beyond,” the White House said soon thereafter.

Trump announced on Twitter that he will make a public statement Thursday noon from the White House “to discuss our Country”s VICTORY on the Impeachment Hoax!”

“Today, the sham impeachment attempt concocted by Democrats ended in the full vindication and exoneration of President Donald J. Trump. As we have said all along, he is not guilty,” she said.

“The Senate voted to reject the baseless articles of impeachment, and only the President”s political opponents – all Democrats, and one failed Republican presidential candidate – voted for the manufactured impeachment articles,” Grisham said.

Trump 2020 campaign manager Brad Parscale said, “The do-nothing Democrats know they can”t beat him, so they had to impeach him. This terrible ordeal was always a campaign tactic to invalidate the 2016 votes of 63 million Americans and was a transparent effort to interfere with the 2020 election, only nine months away.”

Opposition Democratic party accused the Republican-dominated Senate of ignoring the facts, “the will of the American people and their duty to the Constitution”.

Said Congresswoman Nancy Pelosi, Speaker of the US House of Representatives, “Today, the President and Senate Republicans have normalized lawlessness and rejected the system of checks and balances of our Constitution.”

“The President will boast that he has been acquitted. There can be no acquittal without a trial, and there is no trial without witnesses, documents and evidence,” Pelosi said.

“By suppressing the evidence and rejecting the most basic elements of a fair judicial process, the Republican Senate made themselves willing accomplices to the President’s cover-up,” said the top Democratic leader.

House Majority Leader Steny Hoyer described it as a sad day for the republic.

“The United States Senate, acting as a court of impeachment under our Constitution, did not remove a president who abused his power and invited foreign interference in the upcoming election to benefit himself personally,” he said.

“The bipartisan vote in favor of holding him accountable and preserving, protecting, and defending our Constitution against a clear, impeachable offense was, unfortunately, not enough to overcome a partisan firewall of senators who chose loyalty to President Trump over loyalty to their oaths,” Hoyer said.

In her statement, Grisham said it was yet another witch-hunt that deprived the President of his due process and rights and was based on a series of lies.

“Rep. Adam Schiff lied to Congress and the American people with a totally made up statement about the President”s phone call. Will there be no retribution? Speaker Nancy Pelosi also lied to the American people about the need to swiftly pass impeachment articles they dreamt up, only to sit on them for a month before sending over to the Senate,” she said.

“In the Senate, the Democrats continued to make their political motivations clear – Rep. Schiff proclaimed the issues ”cannot be decided at the ballot box” – proving once again they think they know better than the voters of this country. This entire effort by the Democrats was aimed at overturning the results of the 2016 election and interfering with the 2020 election,” Grisham said. PTI LKJ TIR TIR