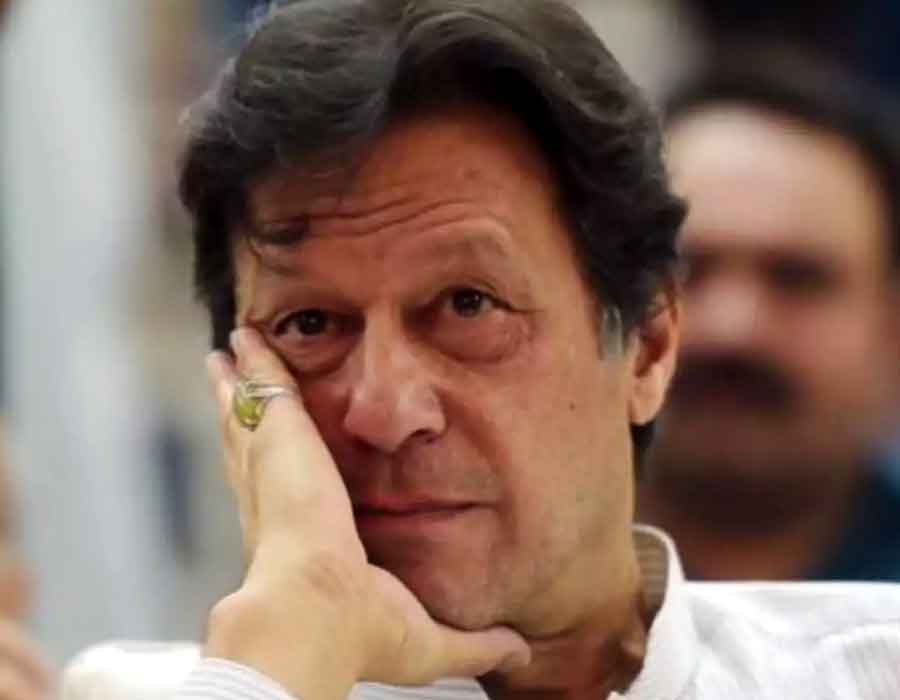 These are tough times for Pakistan Prime Minister Imran Khan. The cricketer-turned-politician had promised his electorate to bring “tabdili” (Change) in the country by fixing the moribund economy and ushering in a new era of prosperity for those hapless citizens who were at the lowest strata of the society and were condemned to live a life full of misery and indignity. He had also promised to launch a crusade against the corrupt politicians and recover the money they had “looted” from the treasury. Imran had vowed to restore the amour propre of Pakistan by not approaching institutions like IMF and World Bank with a begging bowl and surrendering to their humiliating conditions.

However, in last 20 months of his tenure, Imran has proved to be an unmitigated disaster as he has failed to deliver even partially on any of his promises. The economy is in tatters. The inflation is skyrocketing and the hoi polloi is finding it difficult to make both ends meet. Throughout his term, Imran Khan has been roaming around the world capitals scrounging for dollars to save his country from going bankrupt and defaulting on payments. Not only that, but he also beseeched the IMF and World Bank for a loan and promised to comply with whatever conditions they deemed fit. On corruption, he targeted, very shrewdly, all his political opponents but turned a blind eye to the turncoats who had joined his own party- Pakistan Tehreek-e-Insaf (PTI) in the run-up to the elections. Worse, the prosecution failed to prove charges against his detractors in the court of law.

Read Also | COVID-19: Why UNSC must hold China accountable for loss of innocent lives across world

Clearly, Imran Khan has gone back on all his promises. When the opposition accused him of making U-turns on his poll promises, the Pakistani prime minister, shockingly and shamelessly, retorted by saying “wise men do take U-turns”. The bitter truth for Imran Khan is that he has failed to provide leadership to a country which had high hopes from him. The common man expected him to exhibit the same level of leadership skills that he had displayed in 1992 cricket world cup which Pakistan won miraculously though at one stage it was on the verge of being booted out of the competition. And the credit went to the never-say-die spirit of skipper Imran Khan. The 1992 victory made him a living legend in the eyes of every Pakistani. The adulation inspired Imran to venture into politics and aspire for the top post of the country. His political struggle fructified after 21 years, albeit with the blessings of the Pakistan Army.

The Opposition taunts Imran Khan by calling him a “selected” Prime Minister. And, there is a definite element of truth in this jibe. Everyone in Pakistan knows that Imran Khan’s ascendance to the PM chair was plotted by the Pakistan Army. Shehbaz Sharif, the brother of former Prime Minister Nawaz Sharif, recently dropped a bombshell by disclosing to a newspaper how the Army was negotiating with him the contours of government formation and structure of the Cabinet one month prior to the 2018 general elections. The revelation made it clear that the army makes or breaks a government according to its whims.

The deal with Shehbaz perhaps could not materialise for some reasons and after that, the Pak Army put its entire weight behind Imran Khan. Those who followed 2018 elections in Pakistan remember how the Army put all probable competitors of Imran Khan behind bars and carefully created a battleground in which the PTI chief was left as the only contender for the throne. Obviously, the “tabdili” was brought about by the Pakistan Army and not by the will of the people of Pakistan.

However, Imran Khan’s all-round failure prompted the Pakistan Army very soon to rethink the continuation of the PTI government. When Maulana Fazal-ur-Rehman of Jamiat Ulema-e-Islam (JUI) took to streets along with his supporters in November 2019 demanding Imran’s resignation, it was widely believed that he had the tacit support of the Pakistan Army. According to some reports in Pakistan media, the maulana called-off the stir after the army assured him of certain action on his demands.

Well, the message was loud and clear. The Pakistan Army was fast losing its patience with the Imran Khan government. By January-February of 2020, the relationship between Imran Khan and Pak Army got so strained that every journalist was talking about the beginning of the countdown for the government’s departure. And some of these journalists were very close to the establishment. However, the sudden advent of the coronavirus pandemic, like in every other country, changed the narrative and priorities for the Pakistan Army. Luckily for Imran Khan, COVID-19 provided his government with a new lease of life.

Pakistan Army may have gone slow in its operation to oust Imran Khan in the wake of COVID-19 outbreak but it has started fastening its grip over his government. At least three recent developments clearly suggest the army has made up its mind for another “tabdili” at an appropriate time and that it’s not wary of publicly intervening in the matters of governance that reflects its loss of faith in the present dispensation.

It’s no secret that Imran Khan never liked the idea of lockdown for combating COVID-19. He has been repeatedly arguing that a poor country like Pakistan can’t afford a complete shutdown. However, he was bypassed not only by the PPP government in Sindh but his own governments in Punjab and KP. The PTI-BNP alliance government in Balochistan also decided to opt for lockdown. The Pakistan Army further rubbed salt by deploying its personnel in the states to effectively implement the lockdown. It was a clear sign of Pak Army snubbing Imran Khan on such a crucial development and refusing to provide any succor to him.

The appointment of two heavyweights in the same department baffled both the political and media circles. If political commentators are to be believed, it’s a clear attempt by the army to put its own man in the Cabinet to keep a close tab on the decision making process. Bajwa’s appointment also aims to protect Pak Army’s image in the eyes of the media and public in case Imran Khan govt further takes wrong and unpopular decisions. One journalist went to the extent of saying that Pakistan will now have two prime ministers. The signals are clear that Imran is now out of favour with the Pakistan Army.

Political circles in Pakistan are presently abuzz about the ongoing consultation for bringing changes to the 18th amendment of the constitution. The Pak Army is being seen as the initiator of this move. The 18th amendment of 2010 was a game changer in the parliamentary history of Pakistan as it took away from the President the power to dissolve the Parliament unilaterally. Not only that, it empowered the provinces to legislate and administer the subjects falling within their purview by transferring almost all the subjects under the Concurrent List to them leaving the Federal Government with just 7-8 Ministries. Consequently, almost 57% of the central pool of resources was allocated to provinces.

According to experts, both these changes were not liked by the Pakistan Army. The army reportedly wants the President to once again hold the authority to dissolve the Parliament unilaterally so that it could manipulate the strings of power with remote control. It also wants a reduction in ministries entrusted to the provinces and a consequent cut in their share of central resources. The army believes that the lack of funds at the centre is hampering their quest to strengthen the country’s defence preparedness. Annulling the 18th amendment will blunt the democracy in Pakistan and once again reduce it to a semi-presidential state that will dance to the tunes of the army.

The Pakistan Army is disillusioned with Imran Khan Government and its stakes are too high to allow the status quo to persist for very long. Since Imran Khan is perceived to be “selected” by the Pakistan Army, the GHQ is looking for damage control and is willing to sacrifice its “selected” PM in order to safeguard its interests and image.

COVID-19 may have saved the day for Imran Khan but the sword is still hanging over his head. Now it’s a case of “when” and not “whether”.