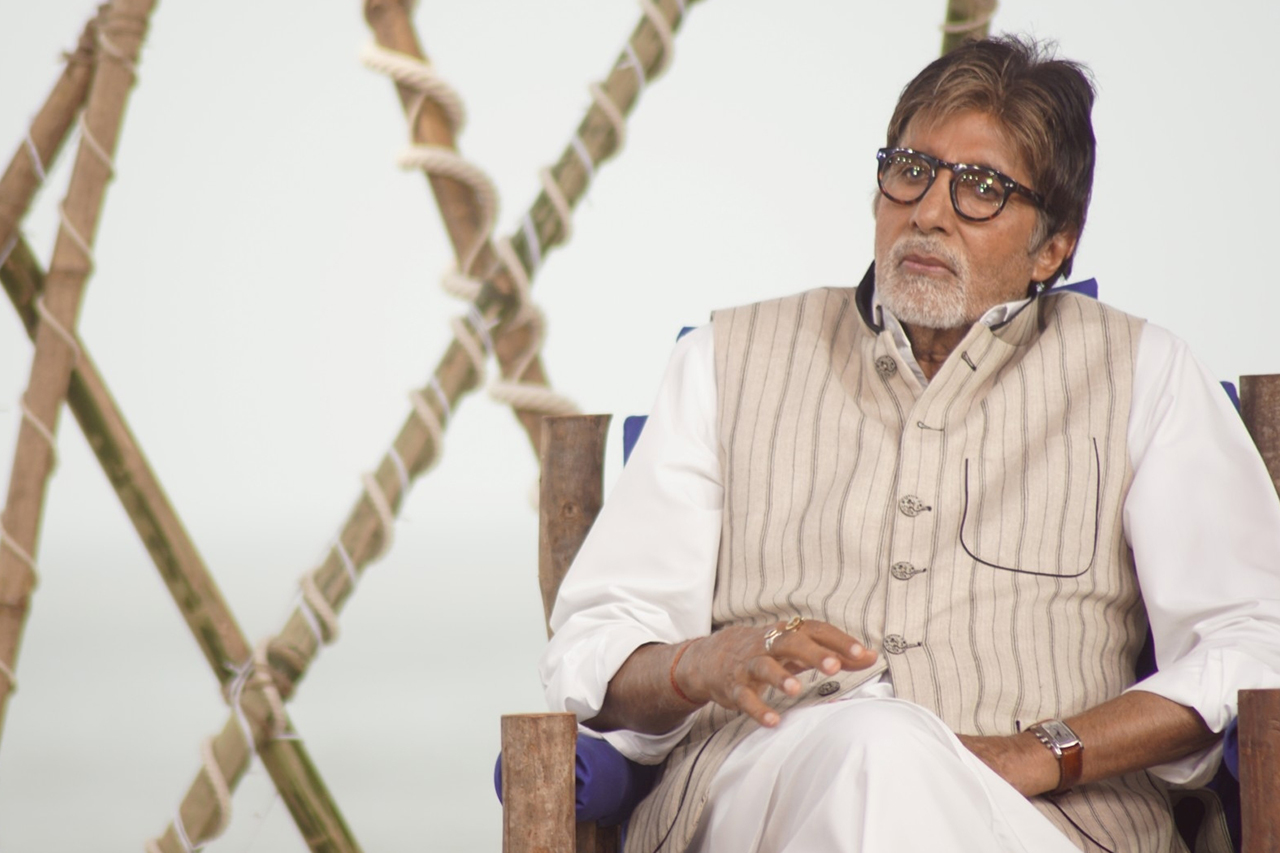 The voice in your ear has a certain crispness to it, over time, it has become gruffer, sand papery and rasping. It is one of India’s most precious baritones, a ne plus ultra, mono typical and unique. As he mouths a dialogue for his new thriller ‘Badla’, the growly voice resonates in my echo chamber: ‘me vo 6 dekhu jo tum dikha rahi ho ya vo 9 jo mujhe dekhna hai”! It has a different quality about it, you don’t need surround sound to support it, it stays with your residual memory. Amitabh Bachchan and his craft has captivated several generations now, ageless as he is, the thespian has completed 50 years in an industry which he straddles like a colossus.

Bachchan wanted to send a message over something that has caused him great pain and distress in recent memory: “Before all else, come laden with our hearts and mind in condolence and prayers for the brave hearts we lost in Pulwama, and the brave hearts that fight and protect us each hour for our safety and security!”

During the course of discussion, there are many matter of fact, phlegmatic and perfunctory replies from one of the most popular film stars of our time, the strong underpinning of modesty coming through at all times. Very clear that the aura and adulation is undeserved, he reckons, but fanboys and fan girls think otherwise. Epithets, hyperbole and verbosity have come his way, but he wonders why, such is the self-effacement and humility. Yet people remain in his thrall. The Inquilab in him (name given to him at birth by his father Harivansh Rai Bachchan, but later changed to Amitabh at the behest of Sr Mr Bachchan’s poet-friend, remains undimmed searching for fulfillment as an actor.

*How would you describe your 50-year journey from the time Abbas Saheb picked a young man from Calcutta to be one of Saat Hindustani? To Sujoy Ghosh and Badla…

Another day another job then … But I have worked in the past with Sujoy, I liked the story and the director, the element of suspense and thrill in the story line got to me. Sujoy has made Kahaani and is restless, seeking perfection from his artistes, very clear in his thought process and how he wants to roll with it. He understands the grammar of cinema intelligently.

*A fulfilling journey where you have worked with great directors and actors, would you say Hrishida and Pran are your favourites, they were both lucky for you in different ways…you made 10 films with Hrishida?

Every director, actor, writer, producer, colleague that I have worked with shall ever remain my favourites …

*Lots of top American actors pursued the method acting model as crafted by Lee Strasberg whom we then saw as Hyman Roth in Godfather 2 pitted against his pupil Al Pacino, it was riveting cinema. When you hit your strides, did you take acting classes or consciously or unconsciously imitate someone or does anyone influence your work?

No, I never took any acting lessons, nor did I consciously or unconsciously imitate someone, unless asked by my makers to do so .. and there were a few such occasions! I have no idea on the method of acting, and have never taken or hit any strides.

*Whose work do you admire in Hollywood? Christopher Plummer is ageless and seems to be getting better…ditto for Clint Eastwood more as a director though? Marlon Brando, Montgomery Clift, James Dean …

*One hears of Ranveer Singh living and breathing his roles these days…or getting into character, I am sure many of your roles would have required major preparation, for instance ‘Pa’ or ‘Black’, if you could explain your craft for such difficult roles?

I have no craft and no idea of what the others do in what they do so brilliantly .. I have followed as diligently as possible the written words of the writer, and the direction given to me by the directors! For ‘BLACK’, we learnt the sign language of the differently-abled! ‘Badla’ is a different genre, a thriller which for years now has hooked us, for someone of my generation, ‘Mahal’ remains embedded in memory recesses since it was a cult film from 1949 starring Ashok Kumar and Madhubala with seminal music. They have been part and parcel of Hindi cinema’s strong fabric. Obviously Alfred Hitchcock was the master of this genre. Thrillers are an integral part of the history of universal cinema. (In his formative years Mr Bachchan himself acted in two very powerful suspense thrillers — ‘Parwana and Gehri Chaal’.)

*You have always said that you have been fortunate in your acting career — me akela hi chala ja rha tha, log judte chale gaye aur karvan banta chala gaya — is that the credo that has determined your life?

I do not know the meaning of credo in my profession .. I do know that I have been fortunate …

I am certain you are more than aware that one can never be too close to the media or too far away from them! The media is the fourth estate, the conscience of the nation. I shall have the capacity, or the audacity to live with my conscience, but not that of the media’s. It would be foolish of me to think so.

*Fifty years of greasepaint and yet the fire remains undiminished. Where do you get your energy from? Or is it respect for work which defines your underlying ethic?

I am at loss as to why you or many others ask me this question?

*In the immediate years after ‘Saat Hindustani’, there were many flops but some seminal work even in a small role in Sunil Dutt’s ‘Reshma aur Shera’, memories of that experience and any other before ‘Anand’?

Just the desire to be able to get another job. Most of the times there was failure …

*Back in Sherwood, did you do any Shakespeare in school, somewhere in your baritone and acting, there is a touch of the thespian which emerges in many of your recent films, is it right to make this connection?

No, never did Shakespeare in school …

*Now that you have completed 50 years of acting, is there a memorable character beyond the ubiquitous Vijay, one that is embedded in your memory recesses and why, I have many favouritese

*Is Hindi cinema in good hands with a New Gen of young directors and actors and middle-of-the-road cinema and actors like Ranveer Singh, Ayushmaan Khurana, Alia Bhatt, Rajkumar or even the Sher from ‘Gully Boy’ telling simple tales that resonate with people? Biopics or true life stories with a slight amount of poetic licence seem to be doing well, Akshay has perfected this art form, you too are doing ‘Jhund’ with Nagraj Manjule. Tell us if this is due to the absence of original scripts or they are the flavour of the season.

Times and circumstances change. They change for every profession too. Films are no different. The present generation is an audacious package of incredible talent! I am in immense admiration of them, and am fortunate that I get to play a small part in their company. It is an education for me. They provide a different and alternative world-view and this is educative. Never ever underestimate the credibility, dexterity, adroitness and skill of the writers and makers of today’s entertainment world. They have been the reason and cause of the flourish and proliferated blossoming in our creativity for the past 100 + years! To have a meaning and standing after 100 years is not a joke. It deserves respect and dignity. Originality is a dichotomous terminology. It needs to be used and expressed most carefully!

*Do you get irritated with the fact that now actors have to sing for their supper as in market and promote their films aggressively and devote a lot of time and energy which wasn’t the case when you were the undisputed ‘Shahenshah’. How and why have things changed in tactics?

Look around and about you, dear sir .. not just actors, but does not everyone in today’s times have to sing for their supper?

*From eight releases in a year in your time, the stars now do one movie in a year or even two years, is this a function of New Age commerce?

It is a recognition of better management, both financial and personal. The good thing is that music and melody are back in Hindi cinema, Music is enjoyed by one and all, music plucks the chords and strings of our souls.

*From the age of parallel cinema to small cinema like ‘Raazi’ and ‘Badhai Ho’ taking on pulp, how has Hindi cinema evolved? Has the palate of Hindi filmgoers changed or has the definition of pulp itself changed?

I do not know what is ‘pulp’ or ‘parallel’. Cinema is cinema — size and girth, small or big are measurement tags on apparel. The palate of every generation in every corner of the world, changes, not just for film but for every walk of life!

*Any memories of ‘Geraftar’ for that is probably the only movie where Rajinikanth, Kamal Haasan and you shared screen space?

It was an honour, privilege and a most humbling experience, to be in the same film as Rajni and Kamal.

View all posts by Sandeep Bamzai →