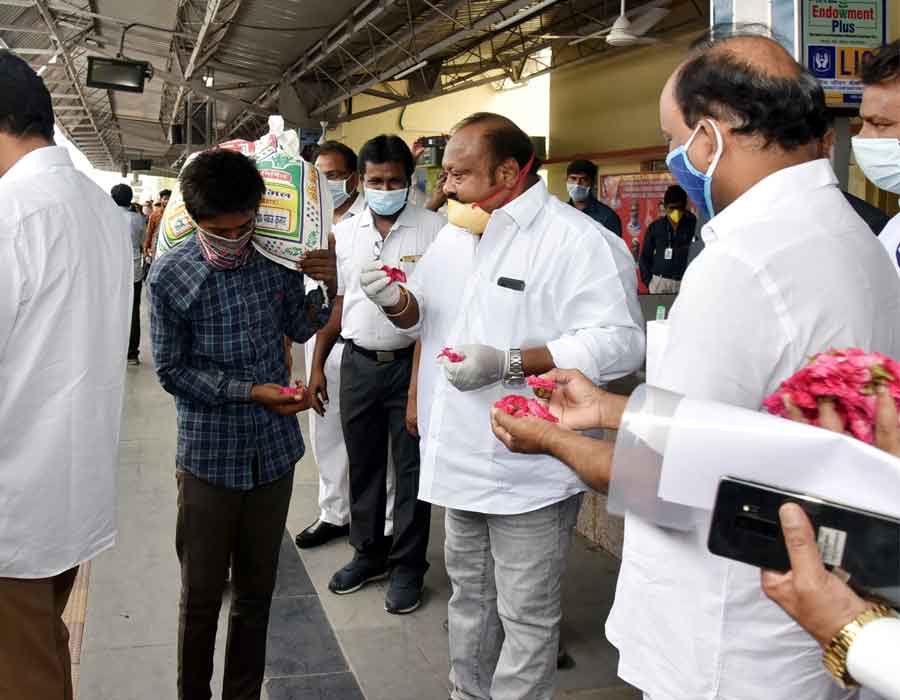 In an interesting development, Bihari workers have bucked the trend of migrant workers scrambling to return to their home states amid the COVID-19 lockdown.

A train carrying 300 migrants from Bihar reached Telangana on Friday. The Shramik special train carrying migrants working in the rice mills of Telangana reached Lingampalli station on the outskirts of Hyderabad from Khagaria in Bihar.

Minister for Food and Civil Supplies Gangula Kamlakar, Civil Supplies Corporation Chairman M. Srinivas Reddy and other officials welcomed the workers on their arrival with flowers.

The Health Department personnel screened the migrants for any symptoms of Covid-19. Thereafter, the workers were sent to the districts where they wanted to work.

Officials said the workers were provided water, food packets, face masks and sanitisers and were also briefed on the precautions to be taken to protect themselves from Covid-19.

The workers were sent to various districts in specially arranges buses. The officials ensured that the workers follow social distancing during the journey.

Kamalakar said more workers from different states would be reaching Telangana to work in rice mills.

Telangana Chief Minister K. Chandrashekhar Rao had said on May 5 that trains carrying migrant workers to Bihar will return with 20,000 to 25,000 workers from the eastern state, who were working in rice mills in Telangana.

Last month, Rao had urged the Bihar government to send back migrant workers to Telangana. More than 90 per cent of the workers employed in Telengana rice mills were Bihari migrants.

“These workers, who load and unload rice from trucks, had gone to Bihar for Holi and were left stuck there due to the lockdown,” the Chief Minister had said.

Rao had even stated that if necessary he would talk to the Centre to arrange a few special trains to bring back the Bihari migrant workers.

The Chief Minister said as Telangana was procuring record 1.05 crore tonnes of paddy from farmers at designated procurement centres in villages in view of the lockdown, the task can’t be completed without the labourers from Bihar, who load and unload the crop from trucks.