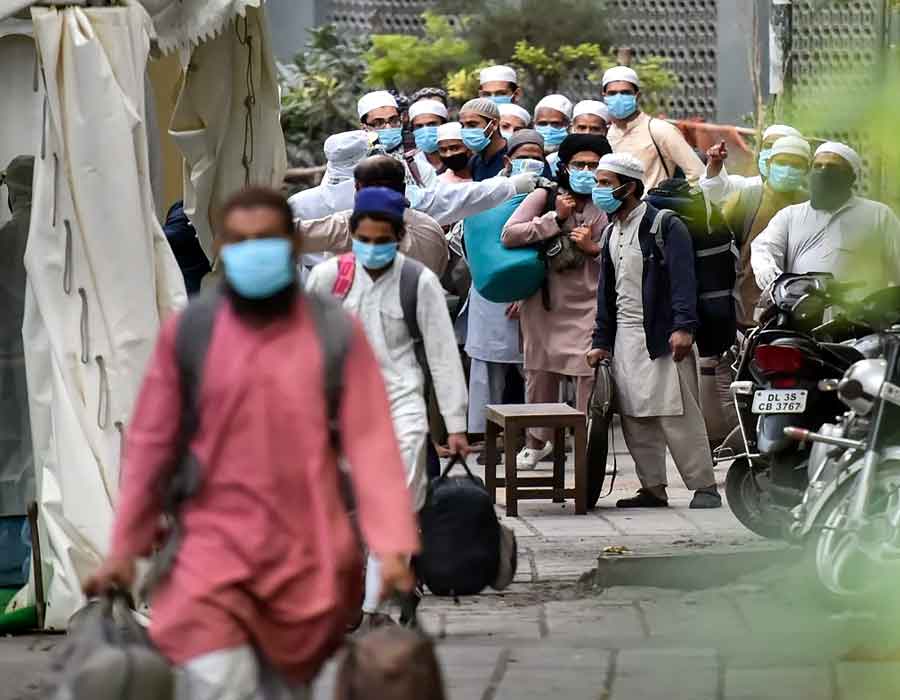 Delhi-based Nizamuddin Markaz has emerged as the ground zero of the new cases of coronavirus following an ijtima in mid-March, according to Delhi Health Minister Satyendra Jain.

According to the minister, the Delhi government is not certain of the number but it is estimated that 1,500-1,700 people had assembled at the Markaz building. 1,033 people have been evacuated so far of which 334 have been sent to hospital and 700 have been sent to the quarantine centre.

Jain said that 24 cases have been found to be positive for coronavirus so far.

The Markaz, also known as Banglewali Masjid, is a six-storey building complex that can house up to 2,000 people. It shares its wall with the Nizamuddin police station and is adjacent to the famous shrine of Khwaja Nizamuddin Auliya. Starting March 13 there was a meeting held here with people from Kashmir to Andaman islands attending it, besides Saudis, Thais, Indonesians. Six of them have died in Telangana after their return.

A high-level meeting was held at the residence of Delhi Chief Minister Arvind Kejriwal over the situation pertaining to the corona spread in the markaz building, 24 hours after the news of the Tablighi spread like wildfire.

Deputy Chief Minister Manish Sisodia and Health Minister Satyendra Jain and other officials were present in the meeting.

Around 800 people have been shifted from the Markaz building in Nizaumuddin to hospitals, according to reports. Around 300 people are yet to be evacuated.

Intense sanitization is underway in the Nizamuddin basti area. The Jawaharlal Nehru stadium is also being prepared as a contingency plan for creating capacity for isolation.

The Nizamuddin dargah it is clarified has no connection with the Tablighi Jamat Markaz of Nizamuddin. The dargah had stopped gatherings in line with advisories during second week of March. The Markaz is half a kilometre away from the dargah.

In a sudden spike in number of COVID-19 cases in Andhra Pradesh, 17 persons were tested positive since Monday night. Majority of them had attended Tablighi Jamaat meeting in Delhi, officials said on Tuesday.

With this the number of total cases in the state rose to 40.

According to medical bulletin by the health department, 14 of the 17 new positive cases had either attended the meeting at Delhi or the contacts of those who attended the meet. Almost all of them are from Prakasam and Guntur districts.

A returnee from Madina (Saudi Arabia) and two contacts of a Karnataka man who had returned from Mecca also tested positive.

More details of these patients are currently being traced and will be updated soon, it said.

Even as the Tamil Nadu government is checking out the Coronavirus infection symptoms in the those persons who had attended the Islamic conference held in Delhi, five persons who had travelled to the national capital have tested positive for the virus.

According to state Health Minister C. Vijayabaskar, seven new COVID-19 cases have been reported in the state taking the total to 74.

Out of the seven male patients, five (three form Villupuram, two from Madurai) of them had travel history to Delhi.

Of the remaining two, one person is a co-worker of a COVID-19 patient and the other had travelled to Thiruvananthapuram in Kerala.

On Monday, the state reported a sudden spike in Coronavirus infected cases with 17 persons testing positive.

Government officials said about 1,500 persons had attended the conference from Tamil Nadu and the virus infection on the members of this group resulted in the spike.

The health department officials statewide are screening about 1,000 persons who have returned after attending the conference.

A health department official told IANS the screening tests done in the state have found some asymptomatic persons which is a worrisome factor.

The government has appealed to the family members of those who had attended the conference to home quarantine themselves and register with the nearest government hospital.

A Muslim religious organisation Tablighi Jamaat had organised a conference in Delhi’s Nizamuddin area this month.

Those who had participated in the conference had returned before the nationwide lockdown was announced.

According to officials, a total of 16 persons who had attended the conference in Delhi have tested positive for Coronavirus in Tamil Nadu.

A 54-year-old person in Madurai tested positive for Coronavirus and later he died. It was learnt that he was in contact with two Thai nationals who had also attended the Delhi conference.

The two Thai nationals also tested positive for Coronavirus and have been admitted to hospital in Erode.

A doctor who had treated the COVID-19 patients in Erode, her 10 month old baby and two others in her household tested positive for virus and have been admitted to hospital.

In Erode containment steps have been taken up.

Their blood samples are being collected for testing.

Deoband also had an event, one tested positive for coronavirus

The Darul Uloom in Deoband did not send any of its members fort the Tablighi Jamaat meeting in New Delhi.

However, eleven people, including one from Kashmir, had visited Deoband for a congregation similar to the one held by Tablighi Jamaat in New Delhi earlier this month, according to media reports.

The event was held from March 9 to 11 at the Mohammadi Masjid, just adjacent to the Darul Uloom.

When the group went back, the member from Kashmir tested positive for Corona virus.

The police officials in Saharanpur were immediately informed of this and the entire mosque was sanitized and sealed.

All those who had come into contact with the group were subjected to medical screening and all of them tested negative for the Corona virus.

Though none of the officials at Darul Uloom were willing to disclose further information on this, a source said that all those who had been screened were also sent into self-isolation for the specified period.

According to government officials, about 1.08 lakh homes in 12 districts where Coronavirus infections has been reported have been screened