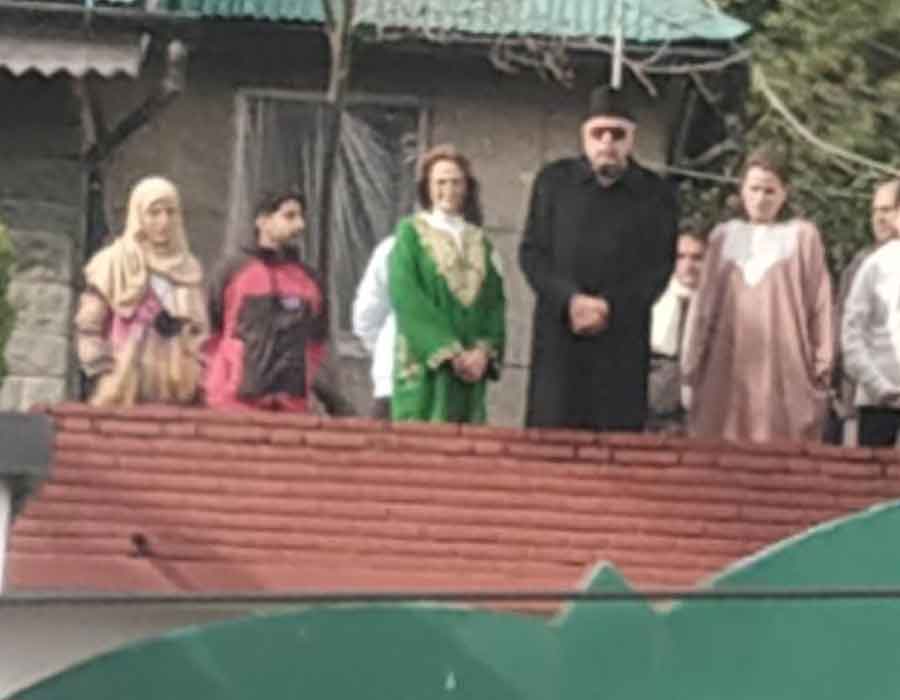 (Farooq Abdullah after his release)

Hours after he was released from seven-month detention, former Chief Minister Farooq Abdullah told reporters on Friday at his residence at Gupkar Raod in Srinagar that he is thankful to the people who prayed for his freedom, “but my freedom is incomplete until all those detained in Kashmir are released”.

Farooq was accompanied by his wife Molly Abdullah and daughter Safia.

“I am thankful to those, in and outside the country, who talked about our freedom. And I also thank Allah that today I am a free man before all of you. But this freedom is not complete as many of our leaders, including Omar Abdullah and Mehbooba Mufti, are still in detention. To set them free is very important.”

He said he hoped the government would act soon and release all those detained in Kashmir.

“I hope the government will act soon to release everyone if they want that the people of the state should have the freedom to live as free people”.

Abdullah promised to be in Parliament in the next two weeks as he recovers from an eye surgery.

“I can’t believe I’m free. I hope everybody else is released too. I will attend Parliament if allowed. And once I am there, I will raise the problems being faced by the people of Kashmir,” Abdullah said as he thanked “all those who stood by me and raised the demand for my release,” he said.

“I will answer no questions nor will I make any political statements till everyone is released. Only when they are released, then I will be able to talk about political matters. I am grateful to you that you have been standing for many hours outside this gate and thank god this gate is open.”

Earlier Rohit Kansal, spokesman for the Union Territory administration, said on Friday that the PSA detention order of Farooq Abdullah has been revoked.

The order said, “In exercise of powers conferred under section 19 (1) of the Jammu and Kashmir Public Safety Act 1978, the government hereby revoked the detention order issued by District Magistrate, Srinagar, which was extended for a period of three months and further extended by three months, with immediate effect”.

Deputy Commissioner of Srinagar Shahid Chaudhary said, “The PSA has been revoked and there are no restrictions on him any more.”

However, a top official told IANS that the order will take some time to be executed.

Abdullah was kept under detention in his high-security Gupkar Road residence in Srinagar city after Article 370 was abrogated and the state divided into two Union Territories of Ladakh and J&K.

There are so far no indications that he has given an undertaking to the authorities that he would not indulge in such political activities that could disturb the law and order situation.

Sources, however, recall a meeting between former Research and Analysis Wing chief A.S. Dulat and Abdullah earlier this month.

After their meeting, there was speculation that he had come to offer some deal to the National Conference president to ensure his release.

Two former chief ministers, Omar Abdullah and Mehbooba Mufti are still under detention and there is no official indication that the detention of these two leaders would also be revoked soon.

Meanwhile, sources close to the family of Farooq Abdullah said that they were very relieved that his detention has ended and that they were now looking forward to the release of Omar Abdullah, too.

THe senior Abdullah was briefly seen in October when a National Conference delegation met him at his residence. He had made a victory-sign to the media present near his house.