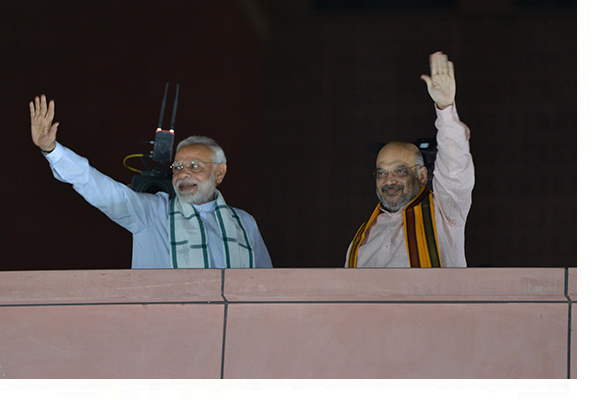 New Delhi: The Congress on Friday lambasted BJP President Amit Shah for parrying a media query over Prime Minister Narendra Modi yet to hold a press conference, and asked if Modi and Shah consider themselves above accountability.

Asked to respond on Congress President Rahul Gandhi’s charge of Modi not holding a single press conference during his entire tenure, a visibly upset Shah — addressing a media conference at the party headquarters here — sought to deflect the question saying “(BJP spokesman) Sambit Patra will respond”.

With the media person persisting with his question, Shah replied: “Will reply… the reply will be on party’s behalf, why are you worried?”

“Does Shah mean democracy is dead in country and the Prime Minister can’t be held accountable to the rule of law or to be questioned on failed policies of his government and charges of corruption?” asked Surjewala.

The Congress leader said Shah’s remarks denigrated the right of media to question and reflected the “autocratic attitude” of the Modi government.

“Does Shah think questioning the Prime Minister for not addressing the media is per se defamatory or bad? Arrogance of power has gone so high that they consider themselves above democracy, above accountability and above answering to the people of India,” added Surjewala.

Taking a jibe at Modi for not holding a press conference ever since he became the Prime Minister in 2014, Gandhi had on Wednesday asked him to hold one, saying “it’s fun having questions thrown at you”.

Modi has been under attack from the opposition for not entertaining media conferences and giving only “scripted interviews to friendly media channels”.

Incidentally, Modi on the day advocated media’s right to question the system.

“To question the system is not only media’s responsibility but also its right and I welcome it,” Modi said while addressing the 75th anniversary of Dainik Jagran.