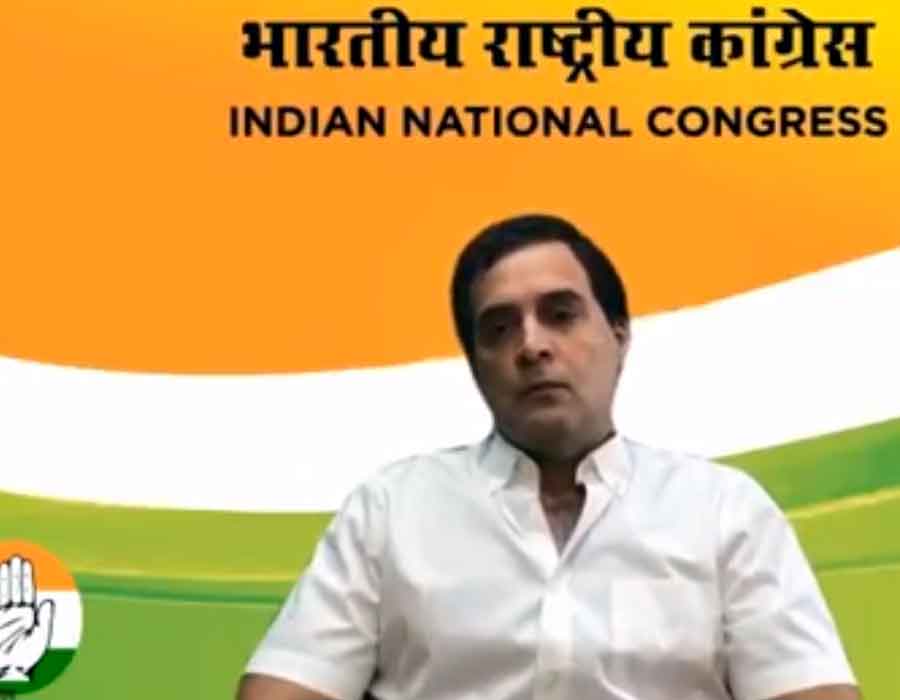 Two days after Prime Minister Narendra Modi announced an extension of lockdown measures for another 19 days, Congress leader Rahul Gandhi on Thursday said that the restrictions are only a pause button to curb the spread of the coronavirus but will not defeat the deadly disease.

Addressing a presser through video conferencing, Rahul Gandhi said that testing is the real weapon against COVID-19, which India should use strategically.

“In no way does a lockdown defeat the virus. It stops the virus for some time. The biggest weapon to fight the virus is testing. Testing is scaled to know where the virus is moving and you can isolate it and target it,” he said.

Calling upon the government to quickly resolve the issue of the migrants stranded at various places without food and money, he feared that it might lead to social unrest otherwise

Gandhi also called for a provision of food to be distributed among the poor and marginalised, while providing a safety net for the MSMEs and other strategic industries, which foreign entities may be eying for takeovers.

Gandhi said the scale of testing in India has been low so far at 199 per 10 lakh people — around 350 tests per district — which he said is not enough to tell which way the virus is moving.

“If you have to fight the virus, you have to increase testing dramatically and your testing has to go from chasing the virus to moving ahead of it. That means you have to move into random testing,” he noted.

The Congress leader said experts across the world and in India say that a lockdown is like a “pause button” and it “is in no way a solution to the virus”.

Urging people not to be worried, Gandhi said they should fight the virus unitedly as the country is bigger than any disease, while asserting that India will overcome the current crisis too.

“No one will be harmed by testing. It should be done on a large scale. But India will have to unite to fight the virus. Caste, religion and creed will have to be forgotten in fighting this virus,” he said.

Calling for a “strategic opening” of the lockdown, Gandhi suggested opening certain key areas and to use testing to identify hotspots.

“This is where ramping up testing is important, to dynamically identify the hotspots,” he said.

“It is important to focus on the strategy after lockdown. What will be the strategy for testing? How will you prepare the PHCs and hospitals? Because, the cases will increase after the lockdown. Action should not be delayed,” he noted.

The Congress leader said the pandemic will have a negative effect on the country’s economy, while adding that people are becoming unemployed and “it is going to get worse”.

He also called for preparing packages for SMEs as well as for big companies.

Calling for providing money and foodgrains to the poor, he said in line with the proposed NYAY scheme of the Congress, the government should give money directly to 20 per cent of the poor people in the country because they are facing difficulties.

Gandhi also called for setting up structures and managing funds, saying if all the money is spent now, there can be a financial crisis later.

“Hence, you need to think and move strategically,” he said, adding that there is going to be a massive financial backlash due to COVID-19 and waves of unemployment that will put a huge pressure on our financial system.

The Congress leader also called for granting adequate resources to the states to help them deal with COVID-19 in a “nuanced” manner.

He insisted that there is a need for devolution of powers to the states to help them effectively deal with the situation, while adding that a “blunt instrument” should not be used and what is needed is a strategic approach.

Gandhi also pointed out that there is a need to use the available resources carefully.