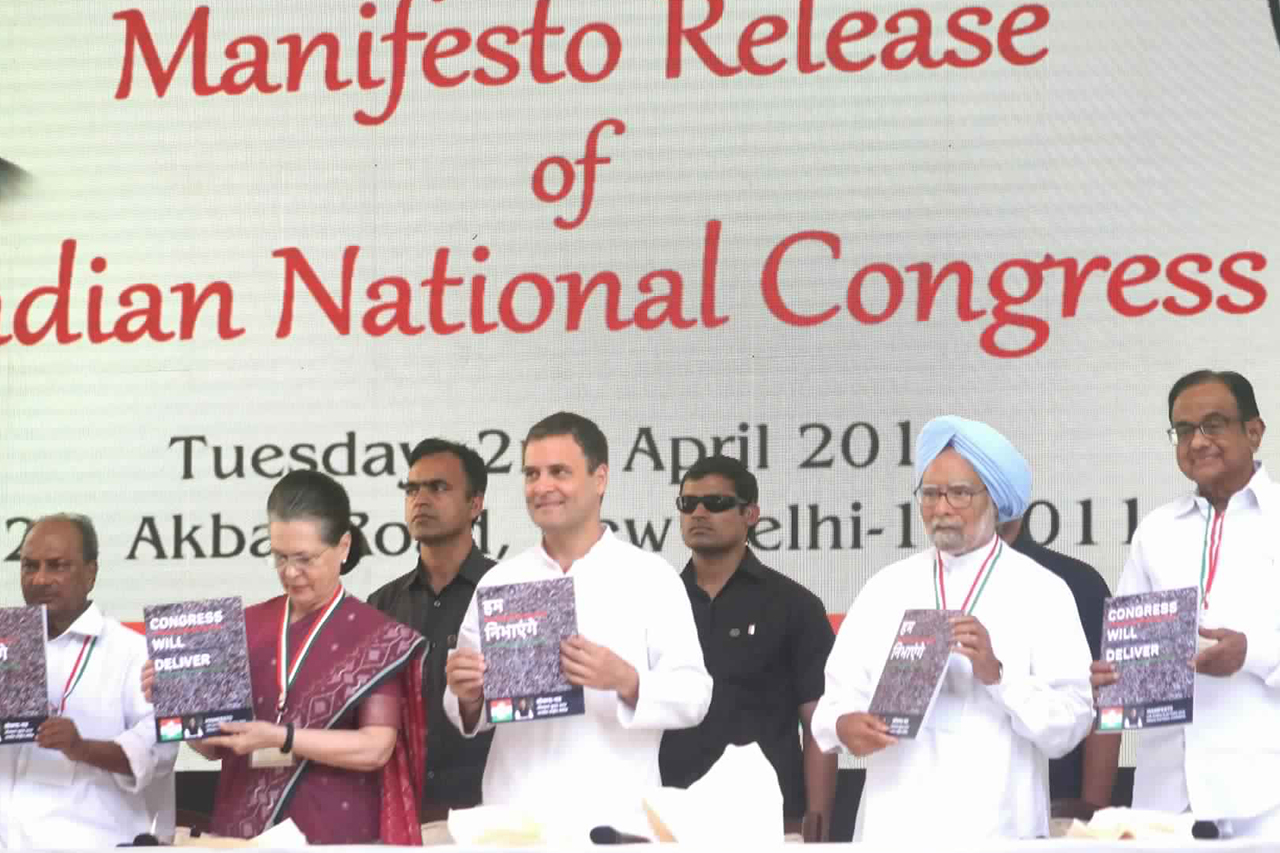 The Congress on Tuesday released a 53-page manifesto for the Lok Sabha elections promising good governance, freedom from indebtedness to farmers, protecting existing jobs while creating new ones and implementing anti-corruption laws without bias.

Divided into ‘Kaam’ – employment and growth, ‘Daam’ – economy that works for all, ‘Shaan’ – pride in India’s hard and soft power, ‘Sushashan’ – good governance, ‘Swabhimaan’ – self-esteem for the deprived and ‘Samman’ – life of dignity for all, the manifesto was released by Congress President Rahul Gandhi, UPA Chairperson Sonia Gandhi and former Prime Minister Manmohan Singh in the presence of senior party leaders.

The Congress promised to launch MGNREGA 3.0 to address issues of water security, soil quality and similar issues that aggravate farmers’ distress. “To this end, we will increase the guaranteed days of employment up to 150 days in cases where 100 days have been achieved in a block/district; and use MGNREGA labour in the Waterbodies Restoration Mission and the Wasteland Regeneration Mission,” the manifesto said.

It pledged to give the highest priority to protecting existing jobs and creating new ones. The Congress said 4 lakh vacancies in the Central government will be filled by March 2020. Besides, it will persuade the state governments to initiate process to fill 20 lakh vacancies. Also, 10 lakh Seva Mitra positions would be created in every gram panchayat and urban local body.

The party promised a loan waiver across the country for farmers. “Through a combination of remunerative prices, lower input costs and assured access to institutional credit, we will set our (farmers) on the path to ‘Karz Mukti’ or freedom from indebtedness.”

Congress document also said that if grand old party returns to power, it will bring a separate budget for agriculture. He said that farmers in a poor state because of the wrong policies of Modi government. “We will present a separate Kisan Budget every year. We will also establish a permanent National Commission on Agriculture Development and Planning,” the Congress manifesto reads.

The Congress will provide a Minimum Income Support Programme (MISP) or Nyuntam Aay Yojana (NYAY) under which Rs 72,000 a year will be transferred to the poorest 20 per cent families in India it 5 crore families.

It said a Congress government will investigate several deals entered into by the Modi government, in particular the Rafale deal. It will also probe the circumstances under which scamsters were allowed to leave the country.

6. Free education to every child

Congress promised to make education compulsory for every child and arrngements will be done to provide quality and free eduction to every child between Class 1 and 8. To achieve this, the Congress said that it will spend 6% of the GDP on education by 2023-24.

It said that it will work to improve the situation in Jammu and Kashmir, including reviewing the Armed Forces (Special Powers) Act and the Disturbed Areas Act in J&K.

Congress said that it is ensure gender justice in the ountry. It said that if Congress wins, the new government will make sure that the Women’s Reservation Bill is pased in the very first session of the 17th Lok Sabha, reserving 33% seats for women in the Parliament and state Assemblies.

9. Safe border and right to study or do business

The manifesto promised safety and a right to study or do business anywhere in the country to the students, traders and others from Jammu and Kashmir, saying the party is “deeply concerned about the cases of discrimination and harassment” faced by these people. “We will adopt a two-pronged approach: firstly, uncompromising firmness on the border and ending infiltration; and secondly, absolute fairness in dealing with the demands of the people and winning their hearts and minds,” the manifesto read.

For North East states, the party promised to restore the special category status and industrial policy.