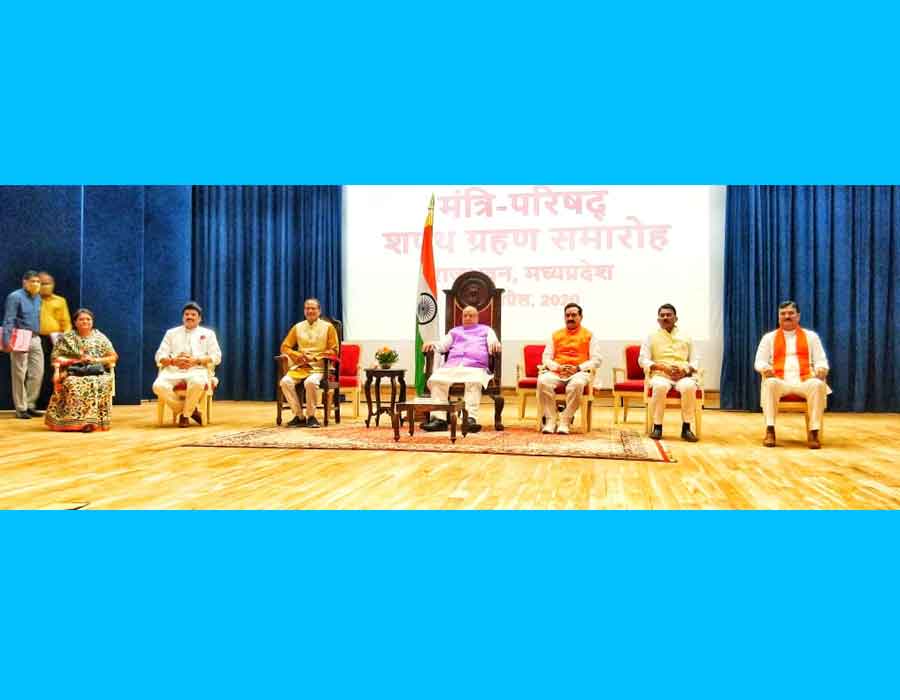 Five ministers, including two from the Jyotiraditya Scindia camp, were sworn in by Governor Lalji Tandon on Tuesday noon at the Raj Bhavan in Bhopal. Social distancing was observed throughout the 20-minute ceremony.

Chief Minister Shivraj Singh Chouhan government who had called on the governor earlier in the morning was among very few persons present at the swearing in ceremony.

Chouhan has run the ministry single handed for almost a month since the BJP toppled the 15-month-old Kamal Nath ministry last month.

Narottam Mishra is from Chambal-Gwalior, while Tiulsi Silawat is from Malwa region. Govinf Singh Rajput is from Bundelkhand, while Meena Singh represents Mahakaushal area.

Shivraj Singh Chouohan who was appointed as the chief minister on March 23 was acting as a one-man cabinet since then.

Those present at the swearing-in ceremony could be seen wearing masks, and chairs were kept at a distance from each other. The new ministers took off the masks while taking oath.

Scindia was insisting on at least six persons to be included from among the 22 who joined the BJP last month. After a long haggling, the BJP leadership settled for two to be included in the first lot.

The next expansion is unlikely before the Rajya Sabha elections, said the sources. Gopal Bhargava the former leader of the Opposition during the Congress rule is among the ones to have missed the bus.

The allocation of portfolios is likely to announced soon.