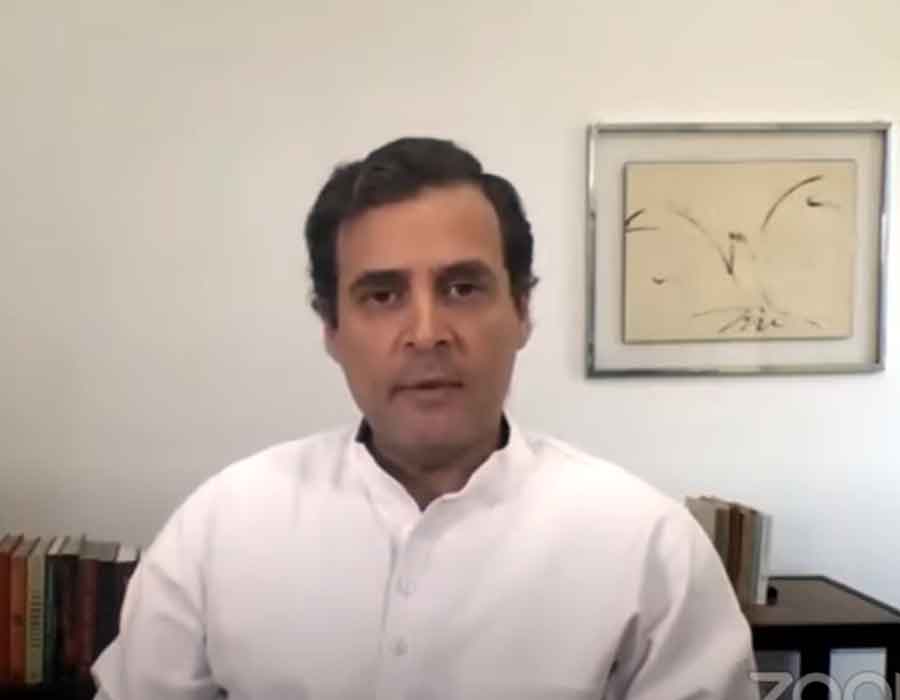 Former Congress president Rahul Gandhi has advised the central government to decentralise the decision-making and empower states and districts to categorise zones on the basis of the COVID-19 situation.

Answering questions of media persons during a virtual press conference, Rahul Gandhi said that the best people to decide on the lockdown were the states themselves as they know the supply chains better.

“Today the situation is not normal. There is not going to be a general solution in this. If we decentralise and take this fight to the district level, a solution can be found. If we keep this fight till the PMO, then there is a possibility of losing,” he said.

“I request the government that they view state governments and the district magistrates as partners and that they do not centralise the decision making.

“I want a strong Indian leader to stand in front of this disease – be it a collector or a farmer. The zones are being decided at the national level while the CMs say that it should be decided at the State level,” said Rahul.

Refraining from launching any attack on the central government, Rahul said that this is not the time to criticise the government. He further said that people should think of the country first and not think in partisan terms like one is belonging to the RSS, BJP or the Congress.

“Everyone has a responsibility. Everyone should forget which party they belong to, the only thing to be remembered is that we are all Indians and together we have to end the fear & the economy has to be brought back on track,” he pointed out.

“We have been in lockdown for 45 days now and we are beginning to run into a little bit of a problem,” said Rahul, adding that the MSME should be given support.

“We simply cannot continue without providing support to the people who are suffering as a result of this lockdown,” he added.

He said that the government should take the idea of NYAY and start putting money directly into the hands of 50 per cent of India’s poor households. It’s not going to cost too much. Rs 65,000 crores is what it is going to cost.”

Rahul Gandhi further said that the nationwide lockdown to combat the spread of coronavirus (Covid-19) is not like an on-off switch, saying that if the government wants to end the lockdown, it must bring physiological change in the minds of the people and transparency in the exit plan.

He said the country is beginning to run into a little bit of problem. “There is a strong feeling that we need to immediately release packages to the MSMEs, give money in the hands of the poor and have a strategy for the migrants besides preparing for the opening of the lockdown,” he said.

Rahul Gandhi also urged the Central government to provide little bit of “transparency” about its actions.

“We need to understand that when they lift the lockdown, what would be the criteria for it, what are the boxes they want to tick before actually initiating the process. It is important that the government tells the people about these criteria,” the Congress leader said.

“We simply cannot continue without providing support to the people who are suffering due to the lockdown,” he added.

The Congress leader further said that the lockdown is not only switching on a key, but it also requires a number of things to happen, it needs a psychological change.

According to Rahul Gandhi, the Covid-19 disease is currently very dangerous for the elderly, and people with ailments like diabetes, cardiac problem and lung disease.

“We need to bring a psychological change in the minds of the people. If the government wants to open up, it has to turn this fear into a sense of confidence. Otherwise, people will start going out the moment the lockdown is lifted,” he said.

“We need a strategy to open up the lockdown. A massive transition is required… it requires coordination between the states, the Central government, district magistrates and many others. That is the challenge the government faces,” he said.

This was the second interaction of the Congress leader with the media in the last one month amid the nationwide lockdown.