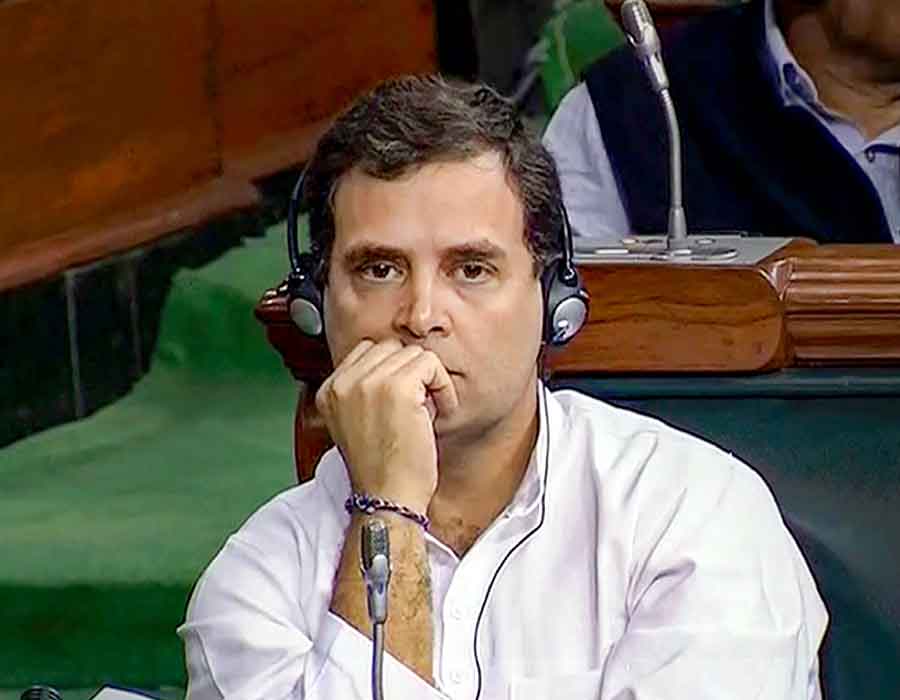 Rahul Gandhi does not hold any position in the Congress party as on today. He is a former Congress president who also happens to be a sitting party MP from Wayanad in Kerala. However, when he decides to address a virtual press conference on COVID-19 pandemic, he gets the adulation, both by a section of the media and the party officials, which is normally reserved for the Congress presidents. Rahul’s presser has made it abundantly clear that he is gearing up for his second innings as the Congress president and his communication team is busy formulating strategy for his image-makeover before his imminent relaunch.

All big and boisterous ideas about the revival of internal democracy and intra-party elections for the top post have been dumped by the cringing party officials and an equally acquiescent cadre. Everybody in the Congress, from top to bottom, is waiting with bated breath for the “prince” to provide them with lifeline by taking over the reins of the party. It’s just a matter of time when the big announcement is made by his doting mother who, despite her fragile health, agreed to be the interim party president with the sole aim of keeping the seat warm for her son.

Well, nobody should have any objection to Rahul Gandhi’s comeback as Congress president. His anointment looks certain as there is no one else in the race. The family seems in no mood to allow anybody from outside the Nehru-Gandhi bloodline to dare to offer even a symbolic fight for the top post. But the question is why did Rahul resign from the presidentship of the party in the first place, that too at a time when the party cadres were deeply demoralised following a massive drubbing in 2019 general elections? It only reflected a lack of resilience on his part in adverse times.

True, the party was mauled in these elections as it could manage only 52 seats, two short than the required number for claiming Leader of Opposition (LoP) status in Lok Sabha. Instead of boosting the morale of the party workers at such a critical juncture, Rahul left the presidentship in a huff. Interestingly, Rahul’s main grouse was that he was not given a free hand in ticket distribution by the senior leaders of the party who, according to him, were more interested in lobbying for tickets to their kin. Does he really think that the electoral rout of the Congress was mainly because of the wrong selection of candidates? Doesn’t it appear that he was just looking for some lame excuse to dodge questions over his erroneous strategy and shaky positioning vis-à-vis Narendra Modi?

Read Also | COVID-19: Why UNSC must hold China accountable for loss of innocent lives across world

The 2019 general election was truly presidential in nature. The towering personality of PM Narendra Modi overshadowed every other contender to the throne. In fact, the contest was so one-sided and the dominance of Modi was so absolute that nobody could even emerge as a potential challenger to the sitting prime minister in the eyes of the common man. As far as Rahul Gandhi was concerned, he had nothing in his arsenal to offer any credible alternative to the people of India.

In Narendra Modi, people had the choice to vote for a person who had 18 years of cumulative experience of governance- 13 years as chief minister of Gujarat and 5 years as the prime minister. Rahul Gandhi, on the other hand, appeared a novice with no administrative experience. What further alienated a large section of voters was Rahul’s personal and vitriolic attacks on PM Modi. Worse, his acerbic slogans like “chowkidar chor hai” appeared childish and smacked of hatred and utter disrespect for a duly elected prime minister. He had to apologise in the Supreme Court for falsely quoting the apex judicial body to justify his pugnacious sloganeering.

Read Also | Nehru-Edwina Relationship: Was it platonic, corporeal or spiritual?

The 2019 loss was primarily the failure of Rahul Gandhi’s communication team to come up with a winning strategy that could position him as a credible, mature and sensible alternative to Narendra Modi. His personal and no-holds-barred attacks on Modi created an image of a politician who was willing to cross all limits of political decency including hitting his opponent below the belt merely for scoring an electoral victory. Obviously, the people of India overwhelmingly rejected his reckless machinations.

However, Rahul Gandhi seems to have learned his lessons from 2019 debacle. The way he handled the COVID-19 presser gave ample hints about his core team recalibrating the entire communication strategy for the Congress scion. To his credit, Rahul Gandhi made very measured remarks and refrained from launching any personal attack on Narendra Modi during his press conference. Not only that, but he also expressed full solidarity with the central government and refused to find any fault with their handling of the COVID lockdown. Displaying a great deal of maturity, Rahul Gandhi extended full support to the government, offered some sane pieces of advice and refused to be drawn in any political “tu-tu-main-main” on an issue that is nothing short of a national emergency. To be honest, this is what is expected from a politician who aspires to become the prime minister of the country.

Rahul Gandhi’s body language clearly reflected his intention to be seen as the “shadow” prime minister of the country. The Westminster model, around which the Indian political system has been weaved, has this practice of having “shadow” cabinets wherein the prime minister and all the ministers (secretaries in the UK) have their “shadow” counterparts from the principal opposition party who not only scrutinise all the major decisions taken by the government but also come up with alternative policies and solutions to the problems that the country faces. The practice is worth emulation in India as it helps in keeping the government and its ministers on toes all the time. However, in case of Rahul Gandhi, there are certain issues that pull him back from being seen as the “shadow” prime minister of the country, at least by the common man because India does not have this system of shadow cabinets presently.

What Rahul Gandhi needs to understand is that before people of India start looking at him as the “shadow” PM, he has to establish himself as a leader who doesn’t get deterred by electoral losses. He can’t afford to be seen as a captain who flees the ship at the first sign of its probable capsizing. Rahul Gandhi reportedly wants complete control over the party as a precondition for taking over as the party president for the second time. In simple words, he wants freedom from the diktats of the old guard in the party. He can put such conditions in Congress only which can’t survive without Gandhi-Nehru family. In any other political party, this is a luxury that no leader can demand as a matter of right. You have to command that stature; you can’t demand it in other parties.

Read Also | Why Shaheen Bagh protesters are violating, and not upholding the spirit of Indian constitution

Rahul needs to be reminded that even Narendra Modi had to face stiff opposition from the old guard when he was declared the prime ministerial candidate ahead of 2014 general elections. Modi had to face opposition from no less a person than Advani, the party patriarch who was known to be his mentor once upon a time. Modi showed maturity by not getting impulsive and it was expected from a person who was aspiring to become the prime minister. It’s a different story as to how he got rid of the old guard and brought the entire party machinery under his firm grip. In political parlance, that’s called realpolitik and Rahul will have to learn the trick. He needs to show the same maturity that Narendra Modi showed in 2014.

Finally, Rahul Gandhi has to appear as a full-time politician if he wants to be seen as a serious challenger to Narendra Modi in 2024. We all know optics plays a crucial role in deciding how a leader is perceived by the electorate. His propensity to go on foreign tours in the middle of crises and elections has created an impression that he is not serious about his politics. And this perception of Rahul has got imprinted in the minds of his party workers as well. Let him not forget even for a moment that he is competing against Modi-Shah duo who are 24*7 politicians and follow the “eat, sleep and drink” mantra of politics.

Rahul Gandhi will have to show the seriousness of a deserving contender to the prime ministerial post before he succeeds in getting acknowledged as the “shadow” PM in the eyes of hoi-polloi. He also needs to show the resilience that could instil enthusiasm in his party workers to take on the Modi-Shah juggernaut. As for his communications team, they have their work cut out for them, ahead of 2024.