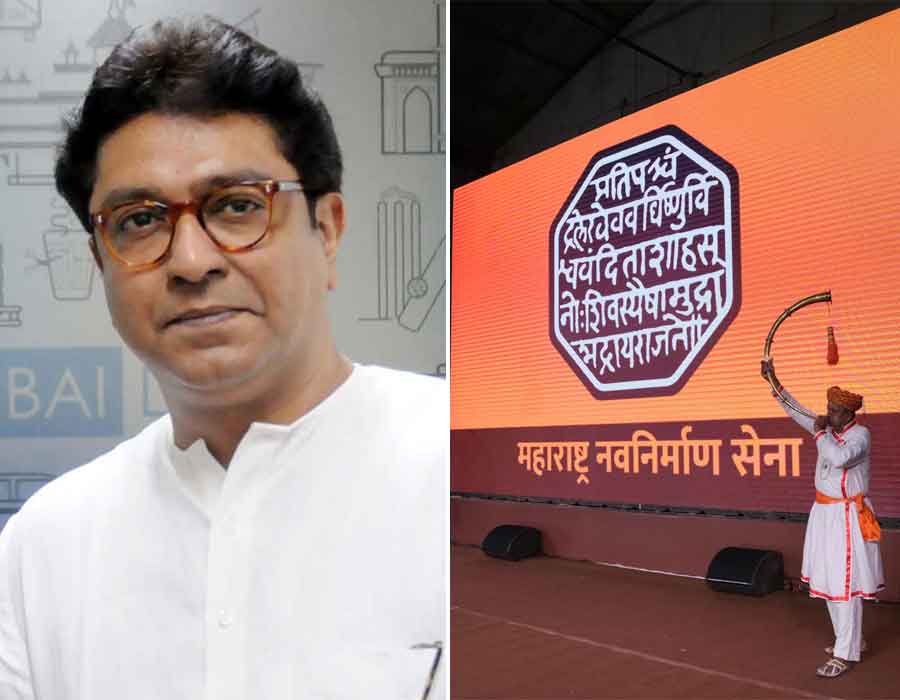 Taking a sharp right turn, Maharashtra Navnirman Sena President Raj Thackeray on Thursday set forth an aggressive pro-Hindutva agenda which would be anti-Pakistani and anti-Bangladeshi infiltrators but inclusive of all genuine Indian Muslims.

Starting his speech on the same note, he greeted the huge gathering as “My Hindu brothers and sisters”, and asked: “Did you like the new party flag?”

Earlier in the day, several party leaders who spoke, proclaimed that henceforth, Raj Thackeray would be the new ‘Hindu Hridaysamrat’ – a honorific usually reserved for his uncle and founder of Shiv Sena, the late Balasaheb Thackeray, whose 94th birth anniversary was celebrated on Thursday.

Interestingly, hoping to prevent any such eventuality, Shiv Sena MP Sanjay Raut on Wednesday announced that Chief Minister Uddhav Thackeray would visit and pray at the Ram Temple in Ayodhya to mark the completion of 100 days of his government in early March.

Raj Thackeray did not hesitate to take potshots at his estranged cousin and Chief Minister Uddhav Thackeray, and put the Shiv Sena-Nationalist Congress Party-Congress Maha Vikas Aghadi (MVA) on notice by announcing that the MNS would set up a ‘Shadow Cabinet’ to monitor the government’s performance in key areas.

He made it clear that he would not oppose merely for the sake of opposition, but deal with all issues on merits before opposing, if they are not in the public interest on the stage adorned with a bust of Chhatrapati Shivaji Maharaj and pix of Dr. B. R. Ambedkar, Savitribai Phule, Prabodhankar Thackeray and Vinayak Damodar ‘Veer’ Savarkar.

“If anybody attempts to touch even a toenail of any Hindu, we will pounce on them as Hindus. But, as I have been saying past 14 years, the genuine Indian Muslims are ‘ours’ always. We cannot reject people like (the late President) A. P. J. Abdul Kalam, Zaheer Khan or Javed Akhtar,” he thundered.

But there was also a veiled punch for Indian Muslims when he said Muslims are free to offer ‘namaz’, but not use loudspeakers. “Do our temple ‘aartis’ disturb anybody? Loudspeakers cannot be tolerated.”

Before anybody could shout, “Laav re te video” (Play that video), his famed refrain during the last Lok Sabha elections when he wholeheartedly attacked the BJP, Raj Thackeray hurriedly admitted: “Yes, I criticized PM Narendra Modi wherever he went wronga But I also praised him for his good works like revocation of Article 370, the Ayodhya judgement and others.”

Referring to the CAA-NRC-NPR protests, he made it clear that while it can be debated for our (Indian) people, it cannot be compromised for the outsiders/infiltrators and those supporting them.

“I feel that all these protests (against CAA-NRC-NPR) in the country are an expression of the pent-up anger against the revocation of Article 370 and the Ayodhya verdict,” he said.

He demanded to know how many Pakistani-Bangladeshi Muslims have sneaked into the country and whether “India is some kind of a ‘dharamshala’ (inn)’ where anybody can enter and settle down.

“First and foremost, throw out all these illegal Pakistani-Bangladeshi Muslims… Stop the Samjhauta Express and the India-Pakistan bus service. What the government is trying to do through CAA-NRC-NPR is correct, and I fully support it. On February 9, MNS will take out a procession in Mumbai demanding that these infiltrators should be chased out of India. I will meet Union Home Minister Amit Shah and Maharashtra CM on this issue,” he said.

Referring to the new party flag bearing the royal seal of Chhatrapati Shivaji Maharaj, he said it was “the flag of his dreams” when the MNS was launched nearly 14 years ago, and the saffron colour was the same as the one used by the Samyukta Maharashtra Movement’s flag in the 1960s.

“This Royal Seal is our inspiration. The party flag is new, but the election symbol (Railway Engine) will continuea The flag colour has changed, its a mere coincidence. This colour is our ‘DNA’… But I have not ‘changed’ my colour just to form the government,” he said, in a swipe at his CM cousin.

However, barely had the flag started fluttering, there were gales of protests from the Sambhaji Brigade, the Maratha Kranti Morcha and others who demanded that it should be withdrawn, launched a police complaint and threatened to file court cases against MNS.

On the momentous occasion, Raj Thackeray formally anointed his 27-year old son, Amit Thackeray as a MNS ‘Leader’, paving the way for another member of the state’s numero uno Thackeray clan’s gen-next to enter politics.

Humbly acknowledging the ‘abhishek’ honour, Amit Thackeray folded his hands took a leaf out of his uncle Thackeray’s book to step forward on the stage, bow and prostrate, to express his gratitude.

When Uddhav Thackeray was sworn-in as CM at a mega-function in Shivaji Park on November 28, he had prostrated himself on the stage to express his thanks to the people of the state.

While Amit Thackeray’s anointment was welcomed by leaders of Congress, NCP, BJP and others, the BJP stiffened over the MNS’ new Hindutva agenda and the proclamation of ‘Hindu Hridaysamrat’ – which Raj Thackeray did not deny!