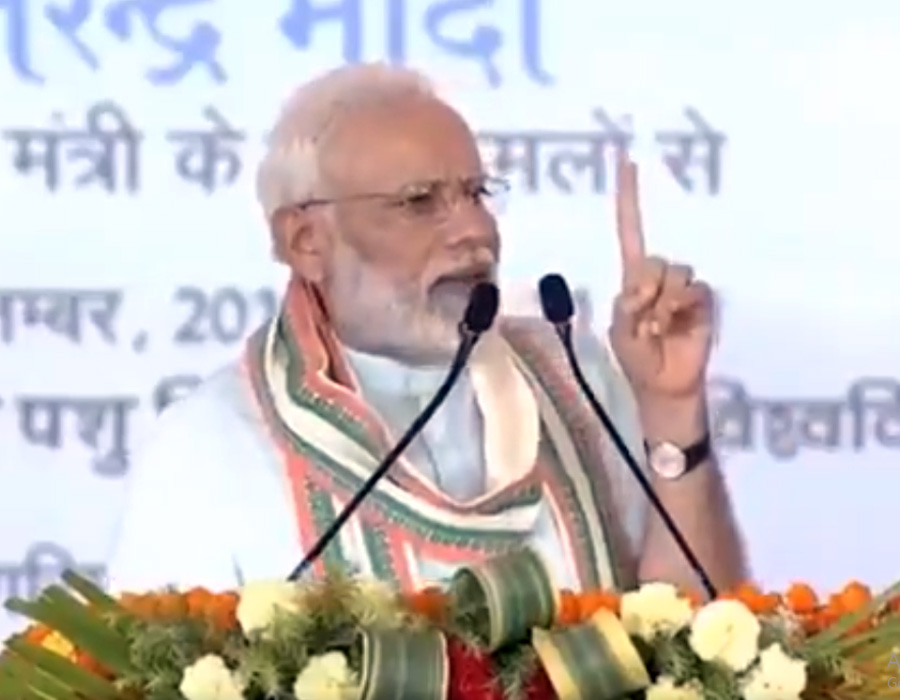 Prime Minister Narendra Modi on Wednesday expressed disappointment over the fact that there are people in our society who consider words like ‘Om’and ‘Cow’ regressive that will push the country backwards. Taking a jibe at such elements, PM Modi alleged that those who are bent upon destroying the nation have left no stone unturned. The prime minister also wondered how can anybody talk about the rural economy without animals? He pointed out that flora and fauna have always been significant to India’s economic concerns and there is a need to maintain a balance between nature and economic development.

1. “Some people, if they hear words like ‘gaay’ (cow) and ‘Om’, their hair stands on end. They feel that the country has gone back to the 16th century. Can one talk about rural economy without animals?…those who are bent upon destroying the nation have left no stone unturned,” PM Modi said while launching the National Animal Disease Control Programme (NADCP) for eradicating Foot and Mouth Disease and Brucellosis in livestock as well as the National Artificial Insemination Programme in Mathura of Uttar Pradesh

2. “The environment and fauna have always been significant to India’s economic concerns. We can move towards a new, empowered India only by maintaining a balance between nature and economic progress,” PM Modi said.

4. Lauding his government’s achievements in first 100 days, the prime minister said,” In the last 100 days,we have done unprecedented job. I believe that we will continue to get your support for the development of the nation.”

5. PM Modi also added that though the whole world was searching for a role model for environmental conservation and for saving trees, India has Lord Krishna as “inspiration”.

A day etched in the history of humankind, when Swami Vivekananda delivered his outstanding address in Chicago.

His message, delivered years ago, is more relevant than ever before! pic.twitter.com/GY0Tb9GS1Y