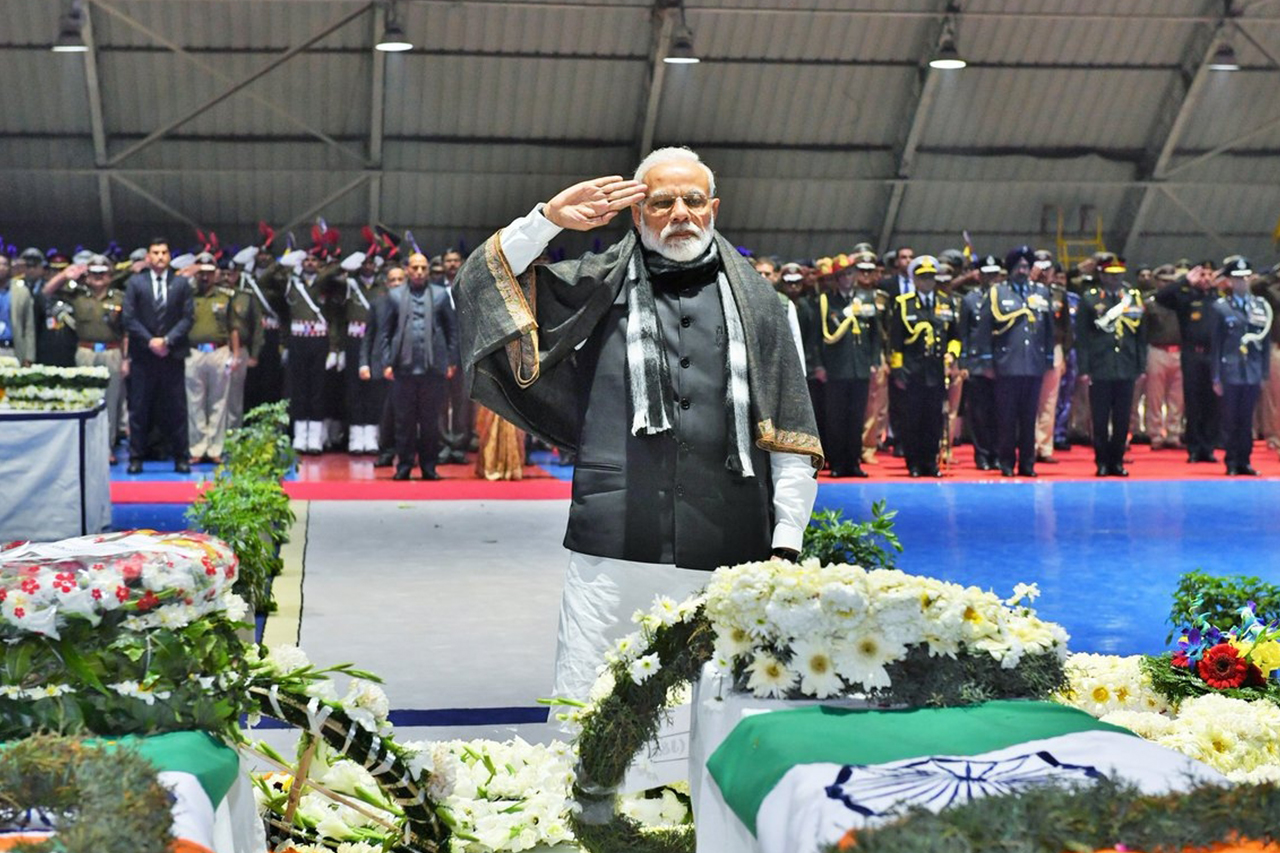 After the February 14 terror attack in Pulwama that left 40 CRPF troopers dead, Prime Minister Narendra Modi has been repeatedly attacking Pakistan and giving signals that the neighbour may have to pay a heavy price for it.

After his hard-hitting statements, the security forces claimed on Tuesday leadership of the Pakistan-based Jaish-e-Mohammad (JeM) operating in the valley have been liquidated.

On the day the attack, Modi said, “The attack on CRPF personnel in Pulwama is despicable. I strongly condemn this dastardly attack. The sacrifices of our brave security personnel shall not go in vain. The entire nation stands shoulder to shoulder with the families of the martyrs. May the injured recover quickly.”

Speaking at the launch of Vande Bharat Express in New Delhi, the Prime Minister said no one can ever slow the pace of India’s forward march.

“The Indian Armed Forces have been given a free hand and the nation is confident of the valour and bravery of its soldiers. Our security personnel, who defend India, carry the vision of India’s safety and prosperity. Those martyred in Pulwama had given their lives for India’s safety and it is now the duty of every Indian to devote his or her life for India’s well-being and prosperity.”

The Prime Minister also warned terrorist organisations and their sponsors they have made a “grave mistake” and assured the country the guilty would face retribution.

On the same day addressing a public gathering in Jhansi, he said, “Our neighbours’ intentions will be given a befitting reply by the people of India. All major world powers are standing with us and supporting us. The messages I have received show they are not only sad, but angry too. Everyone is in favour of ending terrorism.”

He said the security personnel have sacrificed their lives and these sacrifices will not go in vain as he promised the perpetrators of Pulwama attack will be punished.

He said, “Our neighbouring country has forgotten that this is a new India. Pakistan is roaming around with its begging bowl, but it’s not getting help from the world.”

Addressing a rally in Maharashtra’s Dhule and Yavatmal, the Prime Minister lauded the brave hearts and said, “The perpetrators of Pulwama attack will be brought to justice and world will realise this India is new India with a new vision and every tear will be avenged.

“Wherever the terror groups and perpetrators may hide, our security forces will flush them out and punish them,” he said adding when and how to accomplish this has been left to the security forces. “We are deeply pained by what has happened. Every drop of blood of our slain soldiers shall be avenged,” he said.

After discussions with visiting Argentine President Mauricio Macri at the Hyderabad House, Modi said the Pulwama terror attack shows the time for talks between the two neighbouring countries is over and called upon the global community to unite and act firmly against terrorism and those supporting it.

“President Macri and I agreed that terrorism is a big threat to world peace and stability. The brutal Pulwama terror attack shows the time for talks is over. Now the entire world needs to unite and take firm steps against terrorism and their supporters,” Modi said.

“Hesitation in taking firm measures against terrorists and those against humanity amount to encouraging terrorism,” he said.

Addressing a public gathering at Aaure village on the outskirts of Varanasi, his parliamentary constituency, Modi paid tributes to CRPF personnel Ramesh Yadav from the area who laid down his life for the country during the Pulwama terror attack.

PM said his government is working on two fronts to give a boost to development. The first one relates to building infrastructure like highways and railways, the other is to ensure that benefits of development reach the people. Several announcements have been made in the budget, he added.

After holding bilateral talks with Saudi Crown Prince Mohammed bin Salman at Hyderabad House in Delhi, PM Modi said that the “barbaric terror attack” in Pulwama was another manifestation of the danger posed by terrorism to humanity. “We agree that to deal with it effectively, there is need to put all possible pressure on countries which are giving any kind of support to terrorism,” he said, adding that it was extremely necessary to destroy terror infrastructure and to punish terrorists and their supporters.

Modi said there was need for an action plan to deal with extremism so that the youths were not misguided by forces linked to terror and violence.

“I am happy that Saudi Arabia and India have common thoughts on this,” he said.