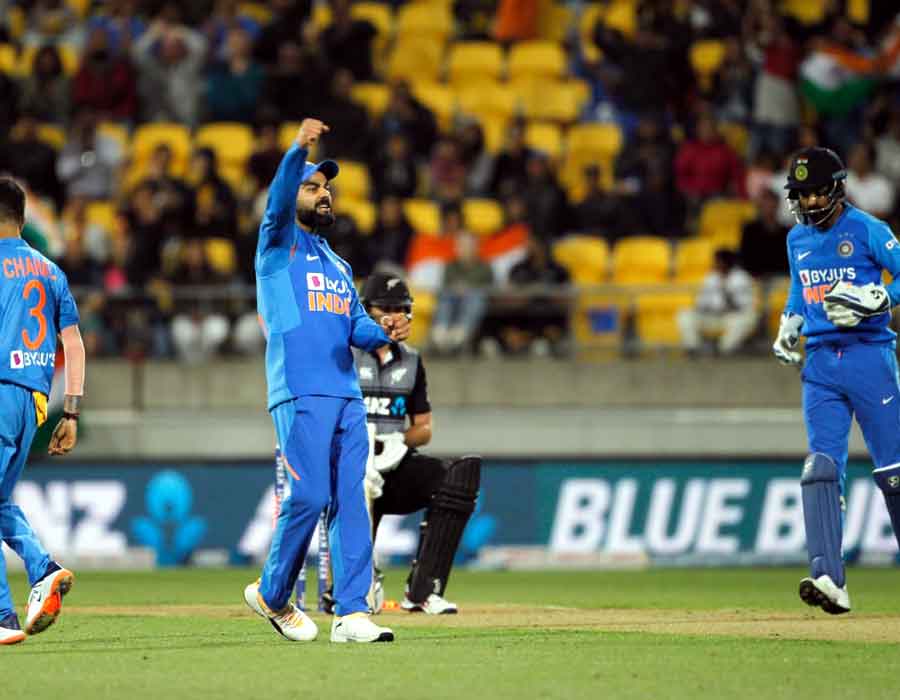 Team India made it two in a row as they beat New Zealand in the Super Over after the fourth T20I between the two teams ended in a tie at the Sky Stadium on Friday. Chasing 14, K.L. Rahul started with a six off Tim Southee and that very much set the tone of the over. While Rahul (10) was dismissed off the third ball, Virat Kohli finished the game off with a boundary to the mid-wicket fence.

Earlier, it was pacer Shardul Thakur who did a Mohammed Shami as India managed to tie the game after looking all but out of the encounter at one stage. With seven needed off the last over, Shardul picked two wickets and there were two run outs as the Kiwis lost the plot completely to take the game into another Super Over.

At one stage, Colin Munro (64) and Tim Seifert (57) looked in control of the chase at the Sky Stadium, but the hosts choked for the second game in a row to give the Indians a sniff of a chance and that is all Virat Kohli and boys needed.

From a position of strength, the Kiwis ended up making a mess of the chase in the last over as they first lost Ross Taylor (24), in-form Seifert was then run out with the Kiwis needing 3 off 4 balls. The drama wasn’t over as the Kiwis then lost Daryl Mitchell before Mitchell Santner (2) was run out looking for an improbable second run off the last ball of the innings.

A target of 166 was always going to be tough to defend, but the Indian bowlers had started well, dismissing the dangerous Martin Guptill in the fifth over of the innings with the score on 22.

Munro and Seifert though combined beautifully to keep the required rate under check. But their 74-run partnership ended against the run of play when Virat Kohli hit the stumps direct as the Kiwis tried to sneak in a second. With the ball headed towards the mid-wicket boundary, Munro and Seifert looked comfortably placed to run a second.

But Shardul rather than throwing the ball directly to the keeper or bowler, passed it to Kohli at mid-wicket and the skipper hit the stumps direct at the batsman’s end as Munro was left stranded.

The dismissal in the 12th over was the first time that the Indians sniffed a chance as Yuzvendra Chahal then sent back Tom Bruce (0) in the next over. But Seifert then combined with Taylor to keep the Kiwis in a comfortable zone.

With 70 required off 50 balls, the duo got stuck into Chahal in the 15th over and picked 17 to ease the pressure. But in the end, it was another choke at the death for the New Zealand batsmen.

Earlier, New Zealand’s spinners tied the Indian batsmen in knots before Manish Pandey batted beautifully to drag India to 165/8. The hosts were without regular skipper Kane Williamson who was out with a shoulder niggle. Tim Southee led the team in his absence and did well as his spinners along with pacer Hamish Bennett (2/41) kept the Indian batsmen in check.

Ish Sodhi was the pick of the bowlers with figures of 3/26 as Mitchell Santner also bagged one wicket and conceded just 26 runs. Santner also took three great catches.

Pandey top-scored for the tourists with an unbeaten 50 off 36 deliveries, his innings laced with three fours, and shared a 43-run seventh wicket stand with Shardul Thakur (20) after India were reduced to 88/6 inside 12 overs.

Skipper Virat Kohli had promised to give his bench-warmers a run after India bagged the five-match T20I series with a thrilling Super Over win against New Zealand to take an unassailable 3-0 lead on Wednesday. And he did just that on Friday as Sanju Samson, Washington Sundar and Navdeep Saini were pencilled in for Rohit Sharma, Ravindra Jadeja and Mohammed Shami.