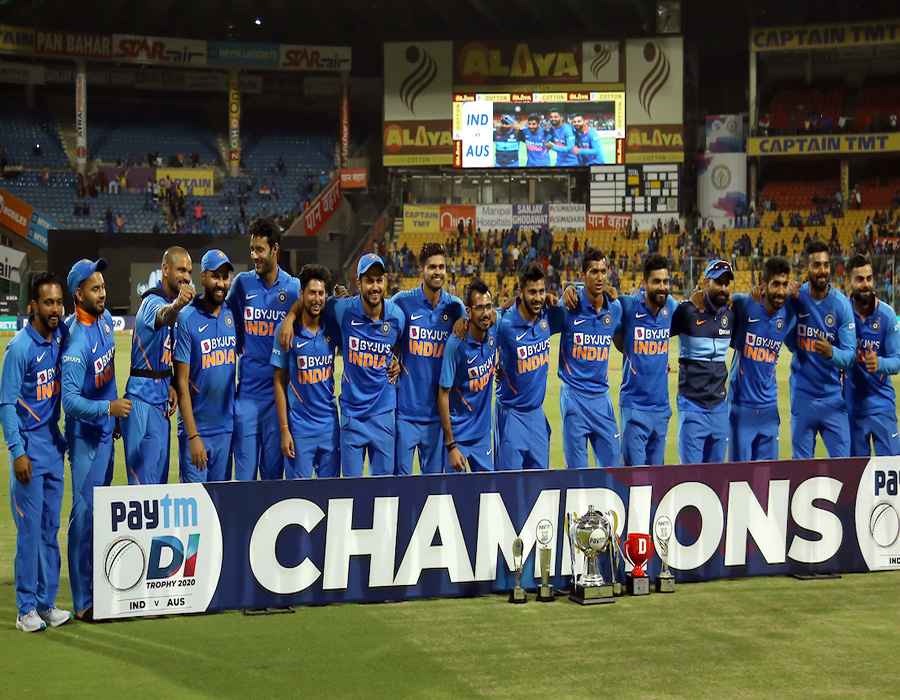 A century from Rohit Sharma and a masterful 89 from captain Virat Kohli took them to a 7-wicket win over Australia in the third and final ODI between the two sides that was played at the Chinnaswamy Stadium in Bengaluru on Sunday.

Rohit scored 119 while Kohli was dismissed 11 runs away from his 44th ton as India chased down 287 with 15 balls to spare. Earlier, Steve Smith led an underwhelming effort from the Australians with the bat with his ninth ODI ton as they finished their innings on 286/9.

KL Rahul opened the Indian innings with Rohit in the absence of Shikhar Dhawan, who hurt his shoulder in the fifth over of the Australian innings. The pair saw out the first 10 overs but Rahul could not survive for long after that. Australia had appealed for an LBW off Ashton Agar in 13th over which was turned out but skipper Aaron Finch went for a review. Replays showed that the ball had pitched in line to the stumps and Rahul had to walk on 19 off 27 balls.

But Kohli then got stuck in with Rohit and the partnership between the two wiped out almost any momentum Australia may have gained from dismissing Rahul early. Kohli and Rohit put up 137 runs for the second wicket in which time the latter scored his 29th ODI ton.

This was his ninth ODI hundred against Australia, thus matching Kohli’s tally against the same opposition. They were helped by a lacklustre effort from the Australian bowlers, particularly their premier pacers Mitchell Starc and Pat Cummins. The pair had gone for 130 runs in the 16 overs that they bowled at the end of the match.

Kohli also brought up his half-century in this time. Soon after that, Australia got their breakthrough in the form of Rohit. Rohit looked to hit Adam Zampa over midwicket and instead, the ball took an edge and went to Starc who took a sharp catch running across from long-on.

However, India then got another 50-plus partnership with Shreyas Iyer coming in at number four and taking the chase by the scruff of the neck. Iyer’s big hits got India into cruise mode while making it more difficult for Kohli to score a 44th ODI ton.

After Shreyas hit a four and a six off the last two balls of the 45th over, India were left with 19 to win off 30 balls and Kohli was on 84. He hit a four off Hazlewood and looked to be going big in order to chase down the ton but in the process, he ended up missing a full delivery that took his stumps. Kohli walked on 89 off 91 balls and his partnership with Shreyas ended on 68.

Shreyas eventually hit the winning runs with a four straight over the bowler’s head in the 48th over.

Earlier, a masterful century from Steve Smith helped Australia post 286/9. Smith brought up his ninth 100 in 117 balls, which was his third against India, He was dismissed on 131 from 132 deliveries as he tried to change gears and was caught at deep midwicket by Shyreyas Iyer off Mohammed Shami who was India’s best bowler.

Smith had hit 14 fours and a six in his innings. Despite restricting Australia to a score below 300 on what is generally a batsman-friendly track in Bengaluru, India had given away as many as 27 extras.