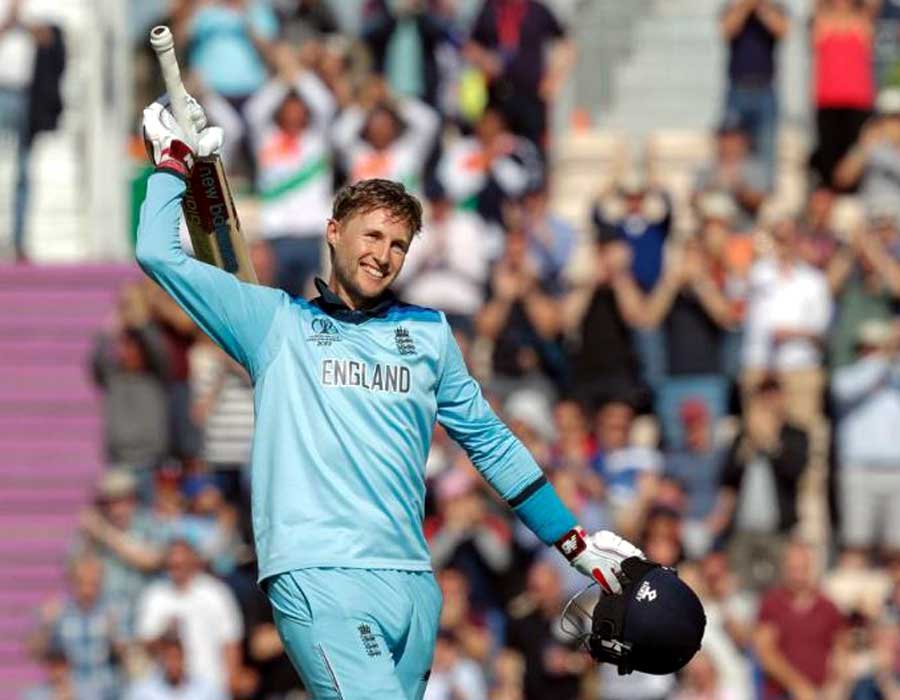 England rode Joe Root’s unbeaten 16th ODI hundred and brilliance of their fast bowlers to register a comprehensive eight-wicket victory over a listless West Indies in a lopsided World Cup encounter at The Rose Bowl here on Friday.

After England captain Eoin Morgan opted to field first, Jofra Archer and Mark Wood took three wickets apiece to bundle out the West Indies for just 212 in 44.4 overs with some serious pace.

Chasing a modest target, England were never in any sort of trouble as Root continued his good form to remain unbeaten on 100 off 94 balls, his innings laced with 11 fours.

Root thus became only the second England batsman to hit two tons in a single World Cup after Kevin Pietersen, who smashed two centuries in the 2007 edition. Root notched up his first century against Pakistan on June 3, but his team lost that game.

Opening the batting in place of Jason Roy who was out of the field for too long after pulling his hamstring while fielding, Root shared a 95-run opening wicket satnd with Jonny Bairstow (45; 46 balls, 4×7).

Bairstow failed to bring up his half-century, holing out to Carlos Brathwaite at third man off Shannon Gabriel.

Chris Woakes was promoted up the order and he too missed out on a fifty, getting out for 40 off 54 balls (4×4) to Gabriel. Root and Woakes stitched together a 104-run stand for the second wicket.

Ben Stokes (10 not out) hit the winning runs with a four off Windies captain Jason Holder as the hot favourites won with 101 balls to spare.

England are now second in the points table with six points from four games while the West Indies are placed sixth with just three points in their kitty from four matches.

Earlier, Woakes rattled Evin Lewis (2) with a brilliant yorker as England were off to a brilliant start. Woakes would have had Gayle too had Mark Wood not dropped him when he was batting on 15.

But that did not hurt the hosts as the big-hitting southpaw holed out to Jonny Bairstow at deep square-leg for 36 (41 balls, 4×5, 6×1), failing to beat the trap set for him by Liam Plunkett (1/30) who kept banging the ball short with the field set for it.

Windies then rode Pooran and Shimron Hetmyer’s 89-run fourth wicket stand to stem the rot after Shai Hope (11) was trapped in front by Wood.

Eoin Morgan threw the ball to Joe Root (2/27) in order to break the partnership, and the move worked as Root first had Hetmyer (39; 48 balls, 4×4) caught and bowled before getting rid of skipper Jason Holder (9) in similar fashion.

Pooran in the meantime brought up his 50 off 56 balls as Andre Russell joined him at the other end. Russell was dropped by Woakes off Adil Rashid when he was batting on 3, and in the same over the burly all-rounder smashed two sixes.

But Wood banged in another short ball and Russell fell for it, hitting it straight to Woakes at deep mid-wicket to allow him to make amends for his mistake moments ago.

From then on, it was the Archer show as he removed Pooran and Sheldon Cottrell off back-to-back deliveries in the 40th over and any plans Carlos Brathwaite had of playing a cameo was cut short as the all-rounder was dismissed for 14, caught behind by Jos Buttler off another Archer bouncer.

Shannon Gabriel was then clean-bowled by Wood to wrap up the show. It was also Wood’s 50th wicket in 50-over cricket.