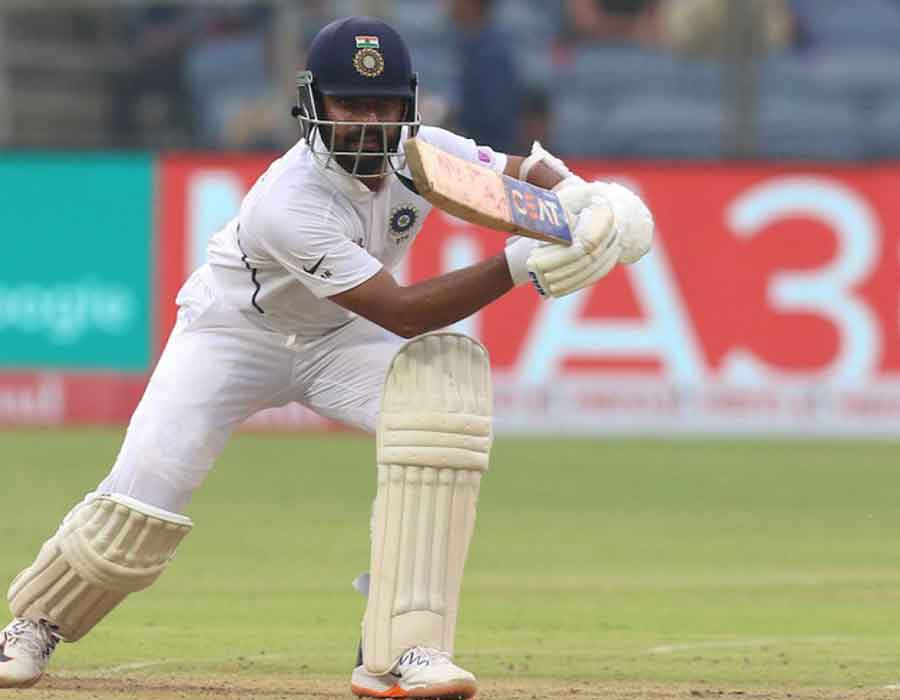 Pace spearhead Trent Boult snared three wickets as New Zealand maintained an upper hand over India who had Ajinkya Rahane and Hanuma Vihari to thank for their resistance as the visitors ended the third day on 144/4, still 39 runs behind the hosts’ lead, in the first Test at the Basin Reserve in Wellington on Sunday.

Looking to cut down a tall lead of 183 runs, India were on their haunches at 113/4 in the second innings, with star batters Cheteshwar Pujara (11) and Virat Kohli (19) back in the hut.

Opener Mayank Agarwal was the top-scorer with a gritty 58 (99b; 7×4, 1×6) but he also failed to carry on. For the Kiwis, Boult returned the best figures of 3/27 in 16 overs with Southee picking up one wicket.

Before tea, Agarwal struck a fifty but New Zealand held on to the driver seat by removing Pujara in the final ball before tea to leave India at 78/2, still trailing by 105 runs.

Skipper Kohli joined Agarwal in the middle but shortly after the break, the opener chased an overpitched Southee delivery down the leg side to be caught behind by wicketkeeper BJ Watling. Kohli asked Agarwal to review but in vain, as replays showed there was a tiny edge off the bat.

Rahane was in the middle and along with the captain, the pair had a job to do. Kohli seemed to be taking time, seeing off the deliveries cautiously outside off stump as the Kiwi pacers targeted the channel which is a soft spot for the premier batsman.

Eventually, Kohli feathered a ferocious Boult bouncer which he tried to pull but instead saw Watling take a simple catch behind the stumps. At 113/4, India were staring down the barrel before Test specialists Rahane and Vihari steadied the ship somewhat.

In the morning session, the hosts rode their tail-enders’ good show to take a 183-run lead after they were bowled out for 348 in the first innings while replying to India’s paltry 165.

Batting second, India lost Prithvi Shaw early — the young opener set up by Boult who dig one in from round the wicket, leaving the right-hander surprised and fending for it. Tom Latham, at short backward square leg, took a diving catch to his left to remove Shaw.

Agarwal and Pujara then shared a patient 51-run stand before the latter, who took 81 balls for his 11, wasted all the hard work to leave a sharply seaming-in Boult delivery which knocked down his off stump. It was the final ball before tea and one that left India in their hunches once again after the pair looked like seeing off the hard hour to dig deep and get their act together.

Earlier, senior-most pacer Ishant Sharma (5/68) took five wickets but debutant Kyle Jamieson continued to hog the limelight with a rapid cameo as New Zealand were all out for 348.

Resuming on 216/5, 51 runs ahead of India’s paltry first innings score of 165, India drew early blood with Jasprit Bumrah getting Kiwi wicketkeeper-batsman BJ Watling (14) caught behind in the very first delivery of the day. It was Bumrah’s first wicket in 48 international overs.

Southee (6) did not last long, with Ishant getting him caught by Mohammed Shami before Jamieson and Grandhomme joined hands to punish India. Jamieson, who had taken four wickets in the first essay, smacked the ball all around the park before holing out to Hanuma Vihari at long off on a delivery by Ravichandran Ashwin (3/99).

It was Boult who further frustrated the tourists with his 24-ball 38-run cameo which helped New Zealand take the lead to 183 before he was caught behind to help Ishant grab his fifth wicket. The Kiwis added 132 runs for the last three wickets.