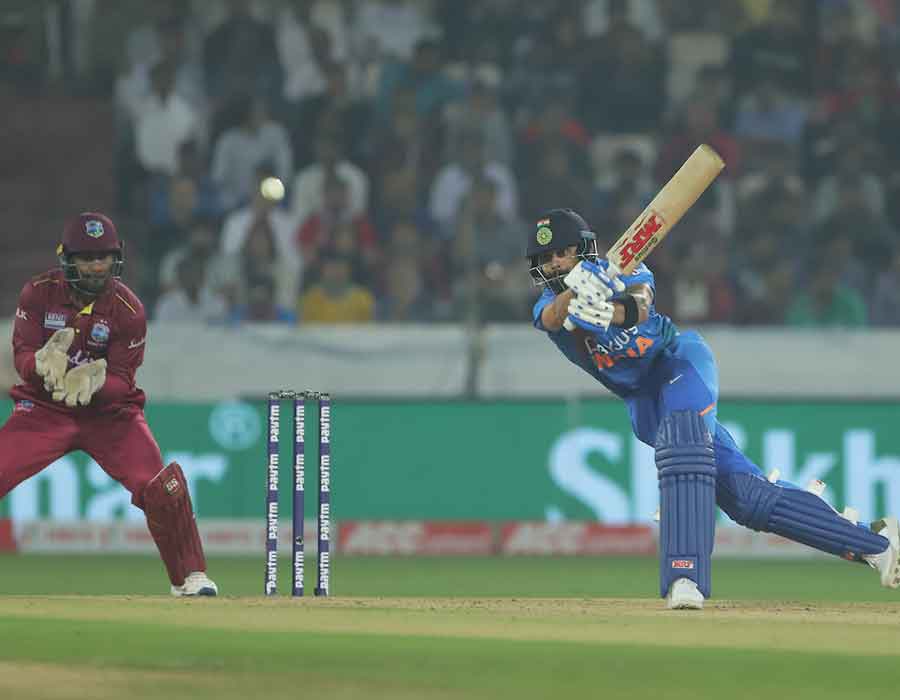 Despite the below-average performance by its bowlers and a poor display of fielding, Team India managed to achieve the 208-run target set by West Indies in the first T20I played at Hyderabad on Friday. And the credit for the victory goes to Captain Kohli who scored a brilliant 94 not out in 50 balls. Opener KL Rahul, who played superb innings of 62 off 40 balls, set the stage for Kohli to unleash his fours and sixes while chasing the target set by the Carribeans.

1. India won the toss and decided to bowl first but the toothless bowling attack failed to live up to the expectations of the captain and conceded 207 runs in 20 overs. Washington Sundar opened the bowling for India but proved so expensive that Kohli did not allow him to complete his 4 overs. Sundar conceded 34 runs in his 3 overs though he got Evin Lewis out leg before. Deepak Chahar got an early breakthrough for India when he got Lendl Simmons caught in the slip on a beautiful outswinger. However, he was hammered mercilessly by the rest of the West Indian batters and conceded 56 runs in his allotted 4 overs.

2. While chasing the target, Rohit Sharma was out early for just 8 runs. After that KL Rahul and skipper Virat Kohli built the innings and set the stage for India’s victory. Rahul played aggressive innings of 62 off 40 balls. After his fall, Rishabh Pant came to the crease and played a cameo of 18 runs off 9 balls. Shreyas Iyer also departed soon thereafter.

3. It was Virat Kohli at the other end who took charge of the proceedings and stayed till the end to ensured India’s victory. He scored 94 not out off 50 balls and hit fours and sixes at will. It was his highest individual score in T20I. Kohli hit 6 sixes and 6 fours in his innings.

4. Kohli’s ‘notebook’ celebration: Virat Kohli also took revenge from Kesrick Williams in style when he hit the WI bowler for a six in the 16th over and used his bat as an imaginary notebook to “tick” the bowler’s name off. Kohli later said that he paid back to Williams as he had done the same in Jamaica after getting him out when the Indian team was there for a tour recently.

You do not mess with the Skip! 🔥🔥 #TeamIndia #INDvWI @paytm

5. It was a poor day for Indians in the field as they dropped many catches including some sitters. Washington Sundar was completely unimpressive while Rohit Sharma also dropped a few catches.

6. India achieved the target with 6 wickets in hand and 8 balls ahead of the stipulated 20 overs. It was India’s highest successful run chase in a T20 Internationals. With this victory, India took a 1-0 lead in the three-match series. The second T20 International will be played in Thiruvananthapuram on Sunday.