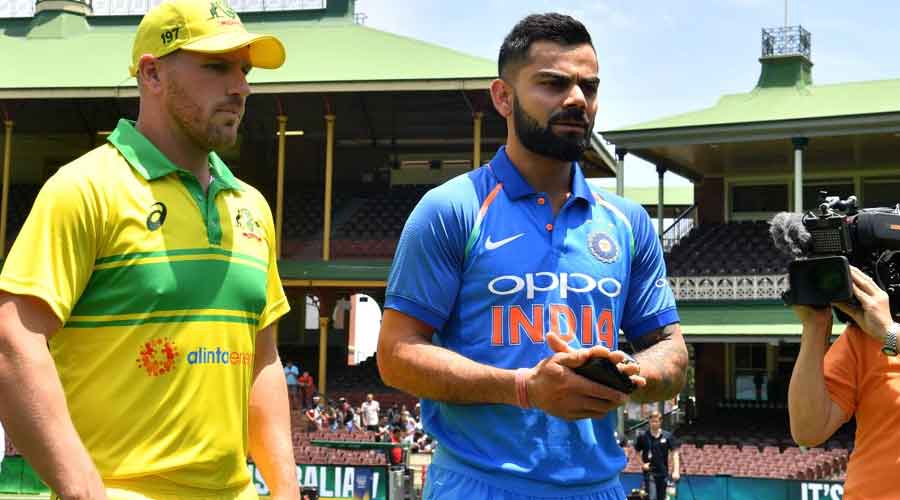 Sydney- Team India lost 11st game of the three match ODI series here today by 66 runs. Set a target of 374 by the Australia, Indian batsmen could reach only 308 in 50 overs, losing 8 wickets. However opener Shikhar Dhawan (74) and middle order all rounder Hardik Pandya (90) put up a good fight but that was not enough to cross the line as other batsmen failed to contribute sufficiently.

Virat Kohli (21), Mayank Agarwal (22) and Ravindra Jadeja ( 25) failed to capitalize after setting in.

Australia, after winning the toss decided to bat first, got off to a flying start with openers David Warner (69) and captain Aron Finch (114) frustrated the Indian bowlers till the score reached 156 in 27.5 overs when Warner became Mohammad Shami first of his three victims. But onslaught continued as former captain Steve Smith too joined the party smashing 105 off 66 balls which included 11 fours and 4 sixes.

After Finch departure characteristic contributions from Glenn Maxwell vaulted Australia to an imposing 6 for 374.

After the loss, skipper Virat Kohli said, “We got enough time to prepare, I don’t think there’s any excuses on the field when you don’t pull up as a side. Probably the first long game we’ve played in a while. I think body language on the field after 25-26 overs was disappointing. We have to find ways to get few overs from our part-timers. We wanted to play positive cricket. We just needed to have a big innings from the top three, 130 or 140, which didn’t happen unfortunately.”

Host captain Aron Finch said, I found it reasonably hard to get my timing. I took a couple of chances every now and then and got lucky. We’ve barely been together as a team. There hasn’t been a conscious effort to play a certain way. You make sure you’re playing to your strengths. Smudge was a different class altogether. Maxwell’s got the ability to just click his fingers and put pressure back on the opposition.

The second game starts on Sunday at the same venue.