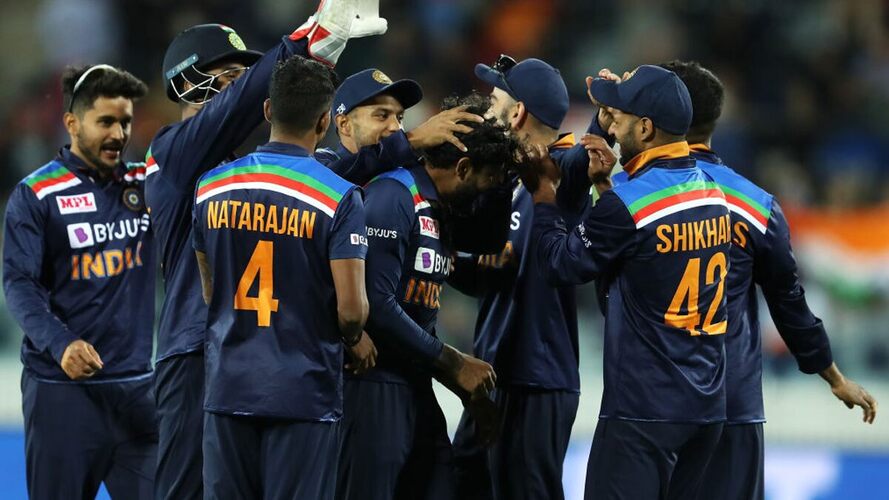 Canberra: Pacers Shardul Thakur, Jaspreet Bumrah and Natrajan helped India beat Australai in the 3rd  game as three match ODI series ends 3-1. Shardul took three wickets whereas Bumrah and Natrajan accounted for two wickets each. For the host, captain was the highest run getter with 75 (4×7, 6×3) followed by Glenn Maxwell (59) whose dismissal proved vital for India. Maxwell was dealing in fours and sixes but made a big mistake by taking a chance against Bumrah, considered to be one the best death bowlers in the World.

It looked like Aussies were once again going to repeat the trend but Hardik Pandya (92 no) and Ravindra Jadeja (66 no) went after the bowling in the last five overs to take 76 off those last five to put a decent score on the board. This ended a five-match losing streak for India. India lost a wicket early after winning the toss and batting first and then were thwarted by the spin combination of Ashton Agar and Adam Zampa. Shikhar Dhawan chipped Sean Abbott to short cover before Shubhman Gill and KL Rahul fell lbw when sweeping Agar, and Shreyas Iyer edged Zampa to point.

Kohli (63) did push up the intent towards the 30th over only for Hazlewood to come back and get him out for the third time in this series. After Kohli’s fall two all rounders whose batting has been under pressure to justify their selection, came in. Both batted like proper batsmen, getting into their innings without hugely sacrificing strike rate, especially with Pandya keeping the bowlers on their toes. Pandya first got stuck into Abbott, taking 17 off the 46th over, reaching 75 off 66 by the end of it. In the last four overs.

Debutant    T Natrajan gave India their first power play wicket in six matches as makeshift opener Marnus Labuschagne played on, but the big one came when Thakur strangled Smith down the leg side for his first non-century score of the series. Finch, whom India reprieved three times in the field, kept the pressure on, but Thakur came back to get rid of Moises Henrqiues, who pulled a long hop straight to midwicket. Debutant Green then got stuck at the start, which brought about a low-percentage loft from Finch.

However, Australia kept challenging India. Green, Alex Carey and Agar provided support for Maxwell to accelerate at the other end. Sweep, reverse sweep, switch hit, pull, slog – everything came off as Maxwell took them to 39 required off the last six overs with four wicket in hand.

India had to go to Bumrah now. Two singles and two wides later, it seemed Australia were one final push away from breaking the chase down. Bumrah, who had had a catch dropped earlier, found the timber as Maxwell backed away to go through cover. Natarajan and Thakur then came back well to close the game out.