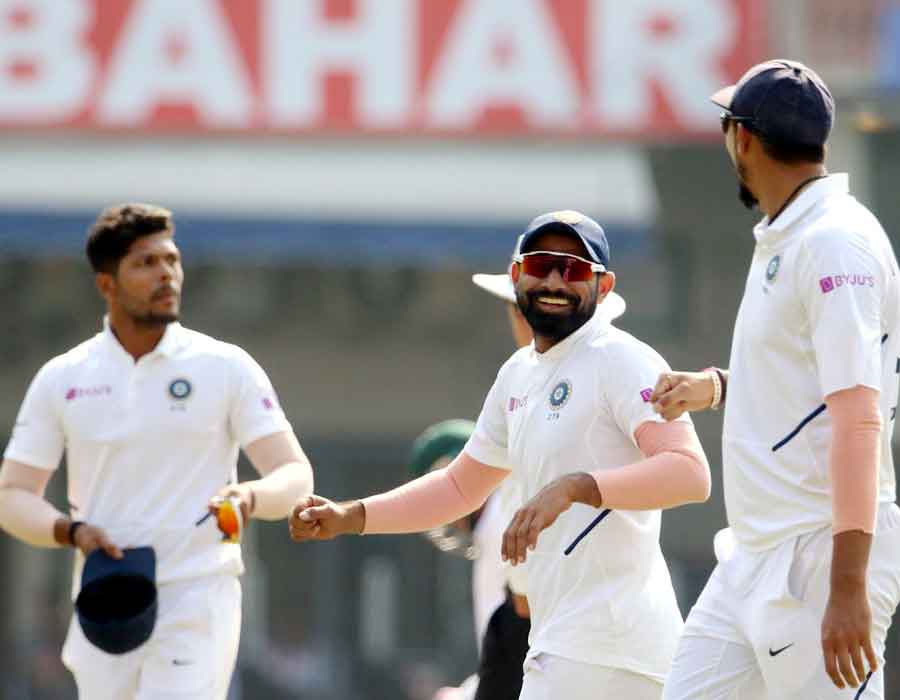 Continuing their winning spree, Team India on Friday beat Bangladesh by an innings and 30 runs in the first Test match that was played at Indore. It was sixth consecutive Test win for the Men in Blue and the last three, remarkably, have been victories with an innings.

The writing was on the wall on the third morning itself and it was all about delaying the inevitable for Bangladesh as the Indian pace bowlers ran through their batting line-up once again as Virat Kohli and boys register an innings and 130-run win over the visitors in the first Test of the two-match series at the Holkar Stadium on Saturday.

While Mohammed Shami once again stole the show with figures of 4/31 (match-figures of 7/58), Umesh Yadav picked two in Bangladesh’s second essay and Ishant Sharma added two to his name. It was only poetic justice for the Indian pace bowlers that the spin-bowling duo of R. Ashwin and Ravindra Jadeja picked just five wickets in the game, all picked by the off-spinner.

For Bangladesh, the only bright spot was Mushfiqur Rahim’s fighting knock of 64 as he delayed Bangladesh’s slide to an innings defeat on the third day. But Ashwin sent him back, ninth wicket to fall, caught brilliantly by Cheteshwar Pujara.

While the third session once again saw the Bangladesh batting flounder, it was only the second session when Mushfiqur, Liton Das and Mehidy Hasan Miraz ensured that they showed application and gritted it out in what otherwise looked like a game that would finish on the third afternoon in the post-lunch session.

The game was completely dominated by the Indian pace bowlers as they first rattled out Bangladesh for 150 in the first innings and then picked four wickets in their second innings in the first session itself on Saturday.

With India declaring on their overnight score of 493/6, it was anyway a matter of playing catch-up for the visitors and Shami ensured that he once again showed his class in the second innings of a Test match as he picked two of the four wickets that fell in the first session. While Umesh sent back the experienced Imrul Kayes (6), Ishant had Shadman Islam’s number for 6.

That was enough for Bangladesh to surrender as the middle-order failed to apply itself as Mushfiqur fought a lone battle.

The post-lunch session still seemed slightly better for Bangladesh as Mahmudullah was one of two wickets to fall in the session nicking to Rohit Sharma in the slip cordon off Shami. Rohit had earlier dropped a sitter and thus gave Mushfiqur a lifeline.

Liton Das stuck on with Mushfiqur and put up a 63-run stand for the sixth wicket. But his journey also came to a sudden end as he became the only man to fall to Ashwin in the second session, hitting it straight back to the bowler having made 35 off 39.

Mehidy however held fort with Mushfiqur as the latter crossed his half century and Bangladesh finished on 191/6 at Tea.