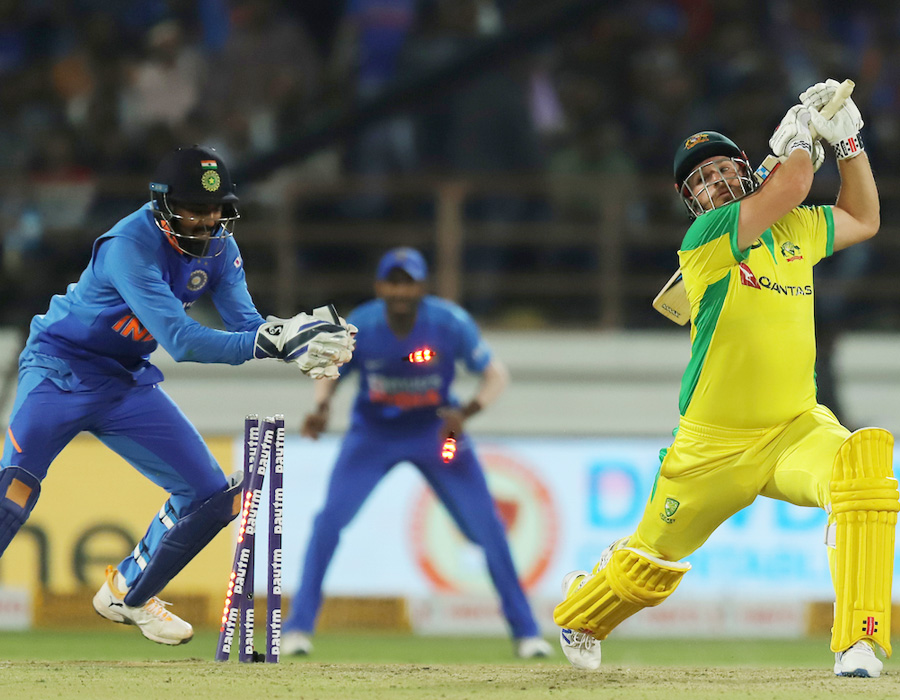 Kuldeep Yadav bowled a game-changing 38th over to complement a KL Rahul blinder as India levelled the series with a comfortable 36-run victory over Australia in second ODI here on Friday.

Put into bat, India put up a much-improved batting performance with Rahul’s blistering 52-ball-80 taking India to 340 for six after Shikhar Dhawan (96 off 90 balls) and skipper Virat Kohli (78 off 76 balls) laid the foundation.

Australia were in the game till Steven Smith (98) carried the battle back to the enemy camp but Kuldeep’s ninth over turned out to be a game-changer as he first dismissed wicketkeeper Alex Carey and then had a delivery that bounced extra to have Smith played on. The visitors were all-out for 304 in 49.1 overs.

Kuldeep’s final figures of 2 for 65 may not be mind-blowing but did just enough damage to see that the third ODI in Bengaluru doesn’t lose context.

Mohammed Shami (3/77 in 10 overs) and Navdeep Saini (2/62 in 10 overs) then bowled some exquisite toe-crushers to put an end to the contest. Jasprit Bumrah (1/32 in 9.1 overs) was economical as ever and his contribution cannot be overlooked.

However on a placid track, Smith, a proverbial thorn in India’s flesh was again proving to be dangerous along with Marnus Labuschagne (44) as they added 96 in quick time.

Ravindra Jadeja’s (2/58 in 10 overs) steady spell got rid of Labuschagne in nick of time to upset Smith’s rhythm after he had hit nine fours and a six off 102 balls.

However this match also brings to fore Rahul’s emergence as proper keeper-batsman option for white-ball cricket as his extra runs coming in at No 5, proving to be valuable in the end.

Not to forget his reasonably decent keeping effecting a stumping and also took two catches. More importantly, his keeping down the leg-side was far better than Rishabh Pant, who is currently recovering from concussion.

Earlier, it was Dhawan, who missed a well-deserved ton by a whisker but laid a solid platform for the aggressive duo of skipper Kohli and Rahul to ensure a commanding total.

Back in form since the last T20 encounter against Sri Lanka, the senior opener looked solid in his 90-ball-96 while Kohli, back at his familiar one drop position, held the middle-order with a 78 off 76 balls and Rahul (80 off 52 balls) provided the final flourish in what was much improved batting performance from the hosts.

While Dhawan added 81 for the opening stand with Rohit Sharma (42) who would regret this missed opportunity on a batting belter after getting set, the southpaw also had a vital 103-run stand with Kohli for the second wicket.

As fare would have it, both the openers suffered from on-field injuries—Dhawan being hit on rib-cage trying to fend a Pat Cummins bouncer while Rohit got a jerk on his shoulder while trying go field at the boundary line.

The Kohli-Rahul duo’s 78-run partnership off 10.3 overs was also pivotal as it helped the latter to launch a final assault during the end overs.

While Dhawan’s innings had 13 fours and a six, Kohli had six hits to the fence including a classic jab-flick off Pat Cummins (0/53 in 10 overs).

Rahul’s was a stand-out innings with six boundaries and three-maximums, one of which was a lofted cover drive off Mitchell Starc (0/78 in 10 overs), who had a forgettable day.

Adam Zampa (3/50 in 10 overs) was once again the stand-out performer taking Kohli out of equation for the seventh time in limited overs just when he was looking to get his 44th ODI ton.

At the start, Dhawan began with a bowler’s back-drive, giving a glimpse of what was in store. The southpaw completed his sixth fifty versus Australia in 60 balls as he played shots all around the ground.

The last time Dhawan scored successive fifties was in January 2019 against New Zealand. This was his 29th in 50-over cricket.

The left-hander was particularly harsh on left-arm spinner Ashton Agar (0-63 in 8 overs), whom he hammered for two successive fours in the 25th, a sweep and a reverse-sweep, and then in 27th over stuck a four and a six, not allowing him to settle down.

In fact the 77 runs from 10 overs bowled by fifth and sixth bowling option Marnus Labuschagne (0/14 in 2 overs) was the difference from the last game.

However, Dhawan missed out on his 18th ODI hundred by four runs when he pulled a Kane Richardson ball straight to fine leg in 29th over.

Shreyas Iyer (7) fell cheaply. But Kohli was in sublime touch as he ran the singles and doubles with intensity and also it the loose balls for boundary.