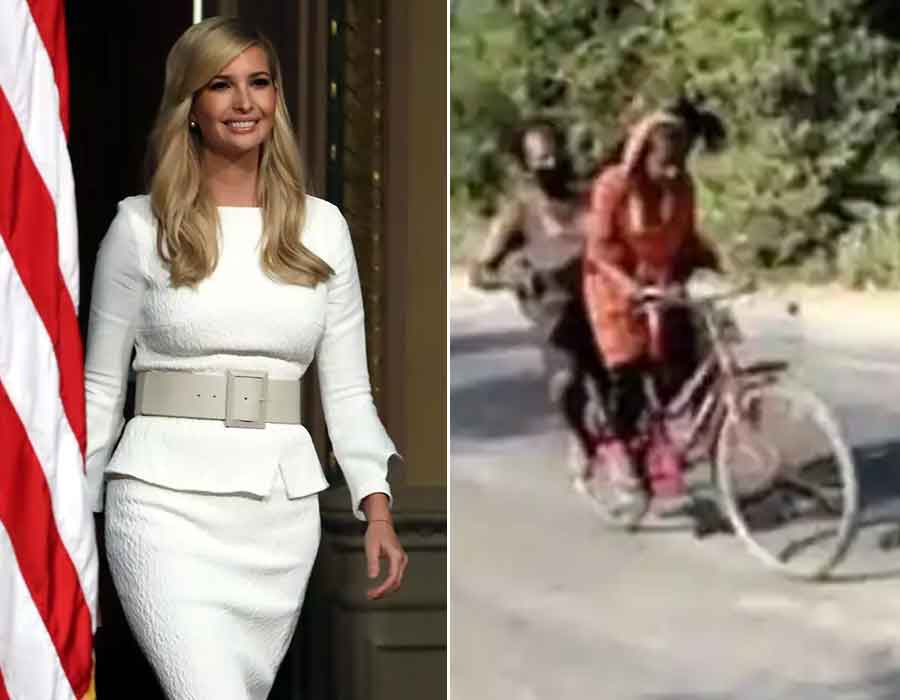 Ivanka Trump and Jyoti with her father on cycle

The story of a Bihar girl taking the pain of cycling 1,200km from Gurugram to Bihar along with his injured father amid the COVID-19 lockdown has caught the attention of US President Donald Trump’s daughter Ivanka.

Impressed by the herculean efforts of the girl, named Jyoti Kumari, the cycling federation has decided to invite her to appear for a trial in June.

“15 yr old Jyoti Kumari, carried her wounded father to their home village on the back of her bicycle covering +1,200 km over 7 days. This beautiful feat of endurance & love has captured the imagination of the Indian people and the cycling federation,” Ivanka tweeted.

Ivanka is also an adviser to US President Donald Trump.

Interestingly, Jyoti cycled for 7 days with her father Mohan Paswan riding pillion. The duo traversed 1,200 km from Haryana’s Gurugram to Bihar’s Darbhanga. After reaching Darbhanga, they have been put under quarantine near their village Sirhulli under Singhwara block of Darbhanga.

Jyoti’s father Mohan Paswan met with an accident a few months ago and he was under tremendous financial pressure. He was not even paying the house rent for the last few months. According to Mohan Paswan, his landlord served him an ultimatum to either pay the rent or leave.

“I succeeded in buying time on a couple of occasions. I promised him that I would take up whatever job I could land once the lockdown was lifted, earn money and pay all his dues. We were so hard pressed that I had to discontinue my medicines so that we could afford one square meal a day. How could we have arranged money for rent?” Mohan Paswan told news agency PTI.

“Amid the gloomy situation, Jyoti suggested that we return home. I pointed out that we would not be able to find any trains or buses soon and my condition would not allow me to walk. She said we should get a bicycle,” he added.

On local media comparing her daughter with Shrawan Kumar, Mohan Paswan said, “She is indeed my Shravan Kumar. The journey back home has been nothing short of a pilgrimage. Having arrived feels like salvation.”

15 yr old Jyoti Kumari, carried her wounded father to their home village on the back of her bicycle covering +1,200 km over 7 days.

This beautiful feat of endurance & love has captured the imagination of the Indian people and the cycling federation!🇮🇳 https://t.co/uOgXkHzBPz