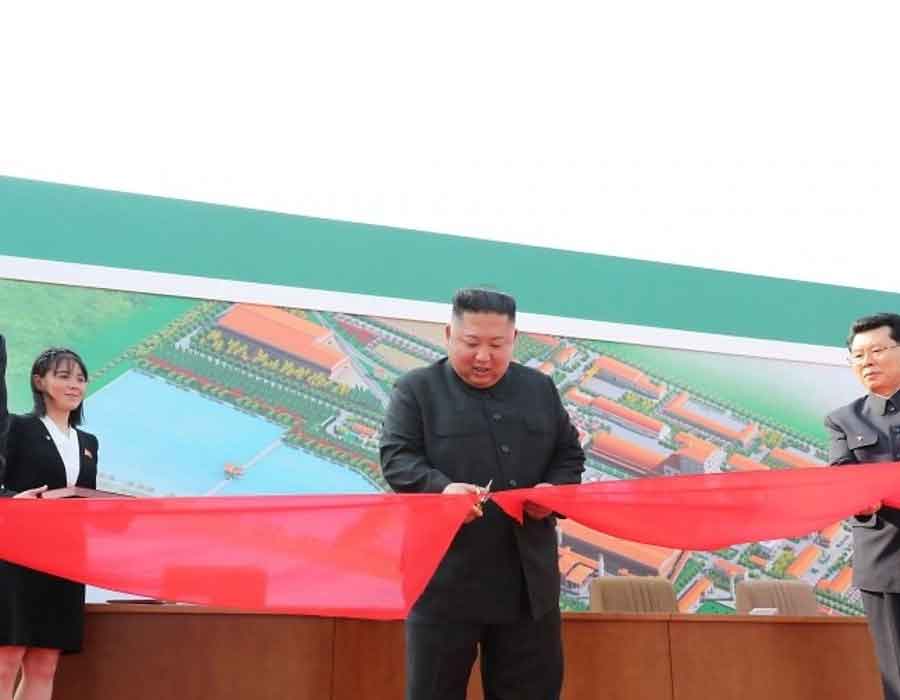 Putting all speculations over his poor health, North Korean leader Kim Jong-un appeared on Friday to attend a fertilizer factory completion ceremony. He did not make any public appearance for last 20 days prompting rumours over his very serious health condition.

Photos released by KCNA showed Kim, dressed in a dark Mao suit, cutting the red ribbon during the ceremony and talking to accompanying officials with a smile on his face.

“All the participants broke into thunderous cheers of ‘hurrah!’ extending the greatest glory to the Supreme Leader who has brought about a new change in the development of Juche-based fertilizer industry and has led the grand revolutionary advance for strengthening self-supporting economy to a victory with his outstanding leadership,” KCNA said.

Juche is the concept of self-reliance.

Kim was also quoted as expressing “satisfaction about the wonderful creation” and “set forth the tasks and ways for developing our chemical industry in a correct orientation as required by the new century”.

Accompanying Kim were his sister Kim Yo-jong, Pak Pong-ju, vice chairman of the WKP’s Central Committee, Premier Kim Jae-ryong and other senior officials, according to KCNA. No. 2 leader Choe Ryong-hae was not among the attendees.

This marked Kim’s first public appearance since April 11, when he presided over a Politburo meeting of the ruling Workers’ Party.

His absence from an annual event marking the April 15 birth anniversary of his late grandfather and national founder, Kim Il-sung, sparked speculation he might be seriously ill, said the Yonhap News Agency report.

In a report last week, CNN had said that the US was looking into intelligence that Kim Jong-un was in “grave danger” after surgery.

That came after a report by Daily NK, a South Korea-based news outlet specializing in North Korea issues, that Kim Jong-un was receiving medical treatment following a cardiovascular procedure.

Fanning the rumours further, North Korean media had not provided any report on the photo on his public activity, though it carried articles on his routine day schedules such as sending diplomatic letters or sending gifts to honoured citizens.

South Korean officials repeatedly rejected the rumours, saying that no unusual movements have been found in North Korea with regard to his health.

It is not rare for Kim Jong-un to disappear from public view, reports Yonhap News Agency.

The latest absence marked the third time this year alone that he has not appeared in public for more than 10 days.

His longest absence from public view was in September 2014, when he disappeared for about 40 days and returned with a cane and limping.

Seoul’s intelligence agency later said that he had a cyst removed from his ankle.

Kim Jong-un is known to have health problems apparently linked to obesity and heavy smoking. His prolonged absence from public view has often spawned rumours about the deterioration in his health.