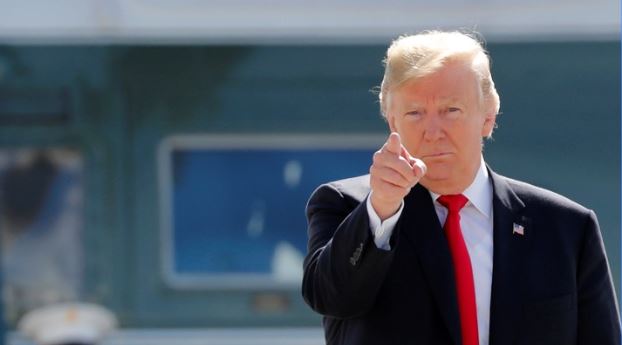 US President Donald Trump has asked Iran “never to threaten” the US and warned Tehran that if it wants a fight, it would be “the official end” of the Islamic nation.

“If Iran wants to fight, that will be the official end of Iran,” Trump tweeted on Sunday afternoon.

His Sunday tweets appeared to be a considerable shift in tone from the President’s brief remarks at the White House on May 16, when he responded “I hope not” after being asked whether the US and Iran were headed toward war, The Washington Post reported.

The White House has not officially responded to Trump’s tweets.

Trump issued his threat a few hours after the commander of Iran’s Revolutionary Guards, Hossein Salami, said on Sunday that Iran does not fear a war but the US does, reports Efe news.

Salami said in a speech at a military ceremony broadcast on state-run Iranian TV that Tehran was not seeking war but did not fear it either, in contrast to the US, which is afraid of war and does not have the willpower to engage in one.

He also warned that the entire Middle East could become “a powder keg” for Washington.

Last week, the US decided to deploy to the Persian Gulf the amphibious assault ship USS Arlington, Patriot missiles, the aircraft carrier USS Abraham Lincoln and assorted warplanes, including bombers, after claiming that it had detected unspecified “indications” of Iranian plans to attack US forces in the Middle East.

In recent weeks, concern has been increasing that National Security Adviser John Bolton, a long-time hawk on Iran who was instrumental in instigating the invasion of Iraq under George W. Bush, might be working to edge the administration closer to some kind of military action against Tehran.

Last year, prior to bringing Bolton into the administration as one of his top advisers, Trump withdrew the US from the Iran nuclear deal. More recently, Trump has tightened economic sanctions against the Tehran regime and his administration says it has built up the US military presence in the region.

If Iran wants to fight, that will be the official end of Iran. Never threaten the United States again!