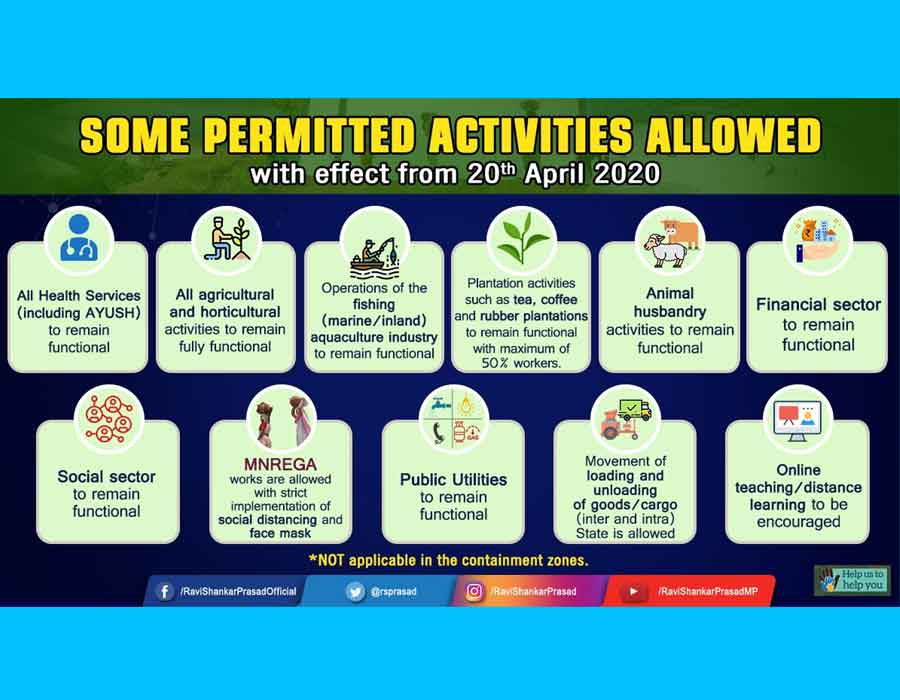 The Union Home Ministry has released a new list of services and activities which are being allowed to open from Monday.

The exemption will be applicable from April 20, in those areas of the country where the effect of coronavirus is negligible, or which are less affected areas.

One such list was tweeted by Union Law and Telecom Minister Ravi Shankar Prasad. This includes healthcare, agriculture, horticulture, fisheries and animal husbandry.

Prasad has said that in some cases the government has given exemptions, and the list has been released. However, these services will not be allowed in the Containment Zones.

Here is a list of what will remain open all over India with effect from 20th April 2020.

This will NOT be applicable in the containment zones.

Significantly, a meeting of the Group of Ministers headed by Defence Minister Rajnath Singh was held on Saturday. After the meeting it was said that any relaxation during the lockdown will be as per the guidelines issued by the Ministry of Home Affairs. But state governments can also strictly enforce the rules on their own.

The e-commerce companies have been asked to start work from April 20 but will have to get necessary clearance for delivery vehicles.

Data work and call centres for the government activities, offices with IT and related services have also been approved. But the condition is that they should not have more than 50 per cent staff.

Activities will also be increased on highways from Monday. Motor mechanic shops and dhabas will also open on the highway for truckers with some restrictions.

The rural area is being given huge relief. Work in brick kilns and food processing has been approved in the villages. Cold storage and warehouse service will begin.

The fishing business will also be started, which will allow fish feeding, maintenance, processing, packaging, marketing and sales. Hatchery and Commercial Aquarium will also open.

Work under MNREGA has also come under exemption from restrictions.

Construction work on roads, irrigation, building, renewable energy and all kinds of industrial projects outside the city will also start from Monday. It has also been said that if a construction project is to be started in an urban area, the labourers should be available on site for this.