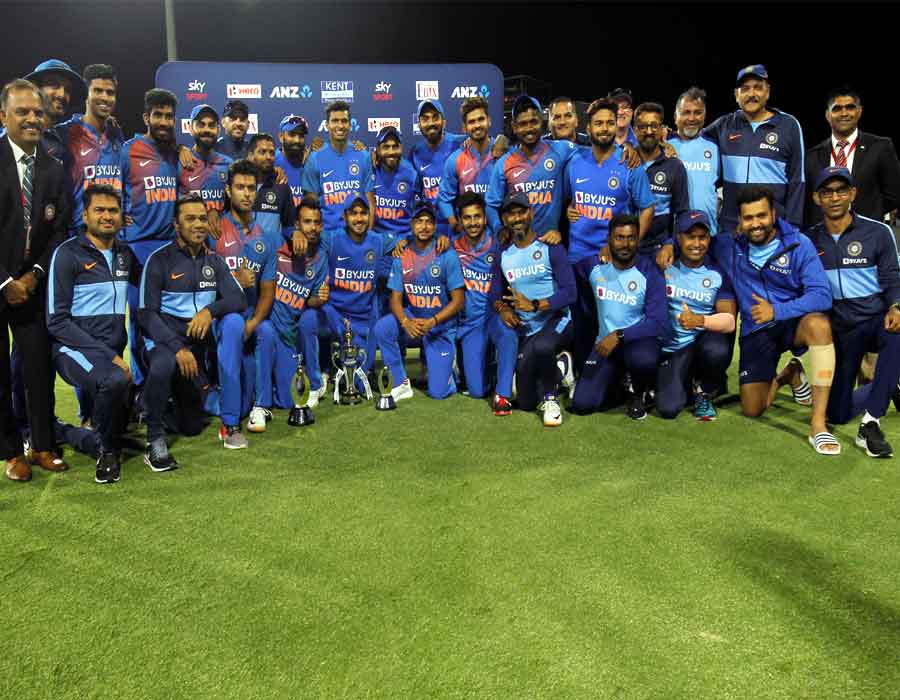 Indian pacers led by Jasprit Bumrah fired in unison to help India script an unprecedented 5-0 series whitewash with a seven-run victory against New Zealand in the fifth and final T20I here on Sunday.

With the series already in the bag after they won the first four matches of the five-match series, skipper Virat Kohli decided to rest in the final game with deputy Rohit Sharma leading the charge.

Rohit had to retire hurt on 60 off 41 deliveries (3×3, 3×3) after he suffered from cramps and initially decided to continue, only to soon realise he can no longer run. He did not come out to field with K.L. Rahul taking over the captaincy role.

Read Also | 4th T20I: Shardul Thakur does a Shami as India beat NZ in Super Over once again

The dashing opener, batting at No.3 in this game, led from the front along with Rahul whose purple patch continued as he made 45 off 33 balls (4×4, 2×6) as India posted a challenging total.

It was then over to the Indian pace trio of Bumrah, who returned magical figures of 3/12, Navdeep Saini (2/23) and Shardul Thakur (2/38) to restrict the hosts despite a Shivam Dube over going for 34 runs.

Chasing 164 for victory, the Kiwis were reduced to 17/3 before Ross Taylor (53) and Tim Seifert (50) got together for a 99-run fourth wicket partnership.

Martin Guptill (2) was the first to go, trapped in front by Bumrah. Fellow opener Colin Munro (15) followed suit as he was castled by Washington Sundar.

Tom Bruce (0) was run out in a horrible mix up between him and Seifert before Taylor, playing his 100th T20I, joined the wicketkeeper batsman and steadied things for the Black Caps.

New Zealand’s chase was given wings by Dube who leaked a whopping 34 runs in the 10th over, forcing Rahul to rue his decision of giving him the ball.

Dube was taken to the cleaners by Seifert and Taylor as the Kiwis reached 98/3, needing 66 off 60 balls.

Saini broke the stand in the 13th over just after Seifert got to his fifty, having him caught at midwicket by Sanju Samson.

In the next over, Bumrah clean-bowled Daryl Mitchell with an inch-perfect yorker and started New Zealand’s downfall.

Shardul Thakur removed Mitchell Santner and Scott Kuggeleijn in the same over and Navdeep Saini put a lid to Kiwis’ ambitions of winning at least one game in the series by having Taylor caught behind. New Zealand finished with 156/9 in 20 overs.

Earlier, Rohit and Rahul helped India to a challenging score.

For the Kiwis, regular captain Kane Williamson, who did not play the last T20I also due to a shoulder niggle, decided not to risk himself with Tim Southee leading in this game too.

India lost Samson early, the Kerala batsman letting go of another opportunity to impress the team management as he managed just two runs from five balls before being caught by Mitchell Santner off Kuggeleijn who was the pick of the bowlers with 2/25.

Samson had failed in the last match too after being given a chance to open the batting which is his preferred position.

Rohit and Rahul then joined hands for a 88-run second wicket stand which formed the bedrock of India’s innings as they reached 84/1 at the halfway stage.

Rahul missed out on a half century as he fell to leading edge off Hamish Bennett with Santner taking a simple catch at cover.

Rohit brought up his 21st T20 fifty in 35 balls and looked good for a big one but he was starved of the strike by the brilliant Bennett as he made Shreyas Iyer work hard for runs in the 14th over. Rohit then suffered from cramps and had to give up eventually after not being able to run.

In the final five overs, India lacked the power hitting as Iyer laboured to an unbeaten 33 off 31 balls. Dube failed again, holding out to Tom Bruce at long on off Kuggeleijn for just five.